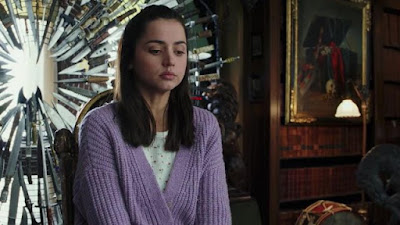 Brick wasn’t as smart as it thought it was. The Last Jedi was pretty dumb. Looper was downright idiotic. How did Rian Johnson get so smart all of a sudden? Maybe, like Craig Mazin, his whole career pre-2019 was one long fake-out, setting us up for the knock-out punch? Even this movie’s trailer wasn’t very appealing. It showcased the movie’s weakest aspect (Craig’s accent, which is harmless but certainly never convincing) and the few jokes that didn’t land (“Is this ‘CSI: KFC’?”). So I was totally unprepared for how great this movie is.

The cinematography! The production design! The dialogue! The performances! (One silly accent aside) One problem is that, since they were being so coy about the plot, they had to hide the fact that Ana de Armas is the main character, which means she didn’t get the star treatment she so richly deserves. She quietly steals scenes from each of the big name actors, keeping us in her head, not theirs.

The most obvious way to promote this movie is “A private nurse becomes the number one suspect in the murder of a wealthy man when it turns out he left her all his money.” But that set-up isn’t established until halfway through the movie, so it would have been frustrating to viewers who had seen the trailer that it took so long to get to that set-up. So instead, it was just promoted as “An old fashioned big-house star-studded murder mystery,” and it did fine, but ultimately its marketing was a liability, not an asset. And because Armas is not one of the previously established stars, she got sidelined by that promotion strategy. Still the plotting and pacing in this movie were pretty much perfect, so I can’t complain.
Posted by Matt Bird at 12:19 AM

What's a simpler explanation: that all of Rian Johnson's movies before this one sucked (as you claim, ridiculously), and that he suddenly transformed?

Or maybe Rian Johnson was great all along, and your taste finally caught up to him?

Also, I can't believe you think Daniel Craig's accent is a weakness in any way. Nearly every time the man opened his mouth I was delighted. Of course James Bond talking like Foghorn Leghorn is ludicrous and out of place -- the point clearly isn't to be "convincing"! Sheesh! That's why it's funny.

You say "The marketing was a liability, not an asset" -- well, seeing as this movie has made more than $250 million worldwide, I'd say the onus is on you, and not the movie, to prove the marketing is a "liability." As for myself, when I saw the trailer I *immediately* wanted to see this movie, precisely because it resurrects a once-thriving, now-long-dormant genre: the cozy mystery, a modern-day "Clue." It's the kind of movie that we know what it is, we understand the rules, but we haven't seen for a long time.

A better rule to derive from this would be more like, "Activate a long-dormant genre."

Remember when there weren't any pirate movies for a long time, the genre was dead? Then there was "Pirates of the Caribbean."

Remember when there weren't any credible Westerns for a long time? Then there was "Unforgiven."

There weren't any original non-animated musicals for a long time? And then suddenly "La La Land" and "The Greatest Showman" came out and killed.

Maybe if I watch Looper five times, I'll realize how brilliant it was! Now it makes SO much sense to send dead bodies into the past. And TLJ? Perfectly paced! Why couldn't I see that before? What all the other Star Wars movies were missing is an extra half-hour tacked on the end.

I agree that the accent was ultimately amusing in the movie. Craig was having fun with it, and that was fun to watch. I just thought it didn't *seem* like it was going to work in the trailer.

I think this is a nearly perfect little movie, and the reviews and word-of-mouth reflected that, and that's why it became a hit, not because of the trailer, which was hamstrung by not being able to talk about the plot. It's one thing to not be able to reveal the villain, but they couldn't even reveal the hero. It was a tough spot for the marketers to be in, is all I'm saying.

But, given those difficult limitations, I think you're right that their best bet was to say "It's a long-dormant genre you enjoyed as a kid!" (I mean, it was a hell of a risk, given that the main example that everyone thinks of, Clue, was a flop at the time) Ultimately it got enough people in to see it, and they implored their friends to go see it.

Of course, according to your logic, it's time for you to acknowledge how awesome Scary Movie 3 and 4, Superhero Movie, and Hangover 2 and 3 were. Maybe Craig Mazin was great all along, and your taste finally caught up to him?

"By your logic," the last refuge of a scoundrel

Don't deny me my last refuge! It's all I have left!

On the podcast Unspooled, Rian Johnson talked about his admiration for filmmakers who make loose, unstructured movies because he himself tries to intricately plot his movies and he respects people who take the opposite approach. (He expressed admiration for Meek’s Cutoff, a movie Matt ripped a long time ago on this very blog.) What genre better suits a watchmaker-style filmmaker than an ensemble murder mystery?

The Agatha-Christie-style ensemble murder mystery subgenre of movies had a heyday in the seventies and early eighties, like Death on the Nile, Evil Under the Sun, The Mirror Crack’d, Murder on the Orient Express, and the Christie-esque Sleuth and Deathtrap. I’m almost exactly the same age as Rian Johnson and I watched those movies on cable so, so many times as a kid and oh holy crap did I love them all, no doubt as he does. Knives Out is an entry into the subgenre I hadn’t realized how much I missed until the trailer hit. Rare to find a mystery that is both twisty and fun. They’re all so dour these days, taking death seriously. Get weird with it, dammit! Give us a puzzle and silly people and interesting visuals and reversals, reversals, reversals!

To echo James, the marketing of this movie is what it had to be: “this is a big-ass mystery movie and you gotta figure out whodunit, and telling you more would be cheating.” That the movie kinda screws with this premise halfway through is an unexpected delight. I’m very glad that twist wasn’t blown in the trailers. To quote Matt from a while back: “Writer and directors complain bitterly about trailers that give away the twist of their movies, but usually this is an indication that the original concept isn’t as interesting as the twist. If your movie is not gripping and fascinating before the twist, then I guarantee that the twist will be revealed in the trailer.” The original concept of Knives Out is the subgenre itself and the promise of Big Stars Being Weird. That proved strong enough a draw that the twist could be saved for the movie itself.

Damn, that was a fun movie.

Ding ding ding, we have a winner. Spot on.

By medieval law, Harvey gets to take over this blog for a month and run it as he sees fit.

But... we're all in agreement, no? The movie was well structured, but the structure demanded that the hero not be revealed in the trailer, so they did the best they could to market it generically (In the literal sense of "we hope you like this genre generally, because we're not going to tell you anymore than what the genre is"). That marketing didn't appeal to people like me or Betsy, but it did appeal to you two and then you two saw it, liked it, and recommended it to others. I probably wouldn't have seen it if James had not recommended it so strongly.

I saw KNIVES OUT twice *in the theater.* I can't remember the last time I did that! Oh wait, it was the previous Rian Johnson movie, which was also great.

Hum... The box office numbers show that what made this movie a success was the word-of-mouth. It had a small opening and long legs. So it wasn't the marketing that made it a success.

There's a weird factor that people are not taking into consideration. Some fans of The Last Jedi went to the movies to support Rian Johnson. Later, fans disappointed by The Rise of Skywalker went to see Knifes Out instead of watching TROS for the second or third time (Star Wars fans do that).

The Last Jedi had issues but many people loved it, and it's not half as bad as The Rise of Skywalker. I'm not sure how much petty Star Wars fans can affect box office numbers, but it's an issue.

I think one issue in Knives Out is that it celebrates goodness. There's too much nihilistic and cynical stuff out there, and a movie with a positive, "good wins" message was a welcome change.

Thanks for backing me up on the marketing/word-of-mouth debate with a little research! I can confirm that non-TLJ fans such as myself (I promise I'm not sexist or racist or a dupe of the Russians, I just thought it was poorly written!) were reluctant to see the movie this movie just out of cussedness, but the reviews and word-of-mouth convinced me to give it a try anyway. And I certainly agree that TLJ was better than TROS. And yes, I love that it celebrates goodness / immigration.

Thank you for writing this review and convincing me to watch the movie! I loved it! But I did not want to see it, because I agree with you- it’s not very marketable. Why? Whodunnits that appear to have one closed setting look boring because the drama appears to have already passed. Also, a circus of A list actors sitting around talking is a good indicator of a bad movie. Lastly, we’ve seen whodunnits like this before- and they are usually very bad and are not clever.

I also agree with you on the accent. Not believable.

I read your book and now unfortunately spend all of a movie identifying the structural components, predicting, and analyzing it. This one fooled me! But I did truly enjoy it and enjoyed counting all the very many examples of irony in it