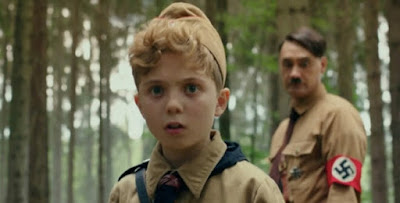 Yes, this movie is greatly indebted to Wes Anderson, but I think it’s ultimately better than any Anderson movie since Rushmore. When I originally wrote up this list, I hadn’t seen this one yet, so I wrote that Joker was the only movie to take Trump seriously. Turns out, that’s not the case. This comedic film, about a good mom who watches her sweet 10 year old son naively (endearingly, in fact) embrace Nazism, could have been been dreadful if it hadn’t judged its tone juuuuust right, but I thought it used its humor as a powerful dramatic tool.

Why do people embrace Nazism? Because it puts you in a world of super-heroes and super-villains that is, on some level, fun. Those people at the Trump rallies are having fun, and mentally regressing to ten-year olds.

If a certain character had not blocked a certain other character’s knife, this would have been a very different movie, and perhaps a braver one, but I think it works the way it is, because it is willing to push us to that point before it takes mercy on us and our hero and drags him back to humanity.

As I’ve said before, I know I’m watching a great movie when I’m not thinking about movies but thinking about my own loved ones. Like many fathers of young sons, I worry so much about the toxic environment awaiting my son, and Roman Griffin Davis’s performance is so remarkable human that I couldn’t help but see my son in him, not a film character. As with tomorrow’s film, this film left me with a profound desire to hug my family afterwards, holding on to them for dear life.
Posted by Matt Bird at 8:00 PM