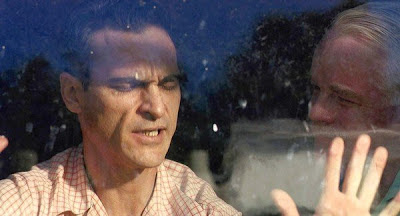 This was a love-it-or-hate-it movie.  Every time I tell someone that this was my favorite movie of the year, I find myself doing so with an apologetic tone, expecting to receive exasperation in return, but I’ve been pleasantly surprised more than once to hear instead, “Thank you!  I thought I was the only one!”

Rules it exemplified:
Don't get me wrong, like almost everything else I saw this year, the movie was somewhat bloated and shapeless, and not the sort of thing that anyone should try at home, but Paul Thomas Anderson transcends traditional moviemaking wisdom here and writes with lightning onto the screen. For once, I’ll have a not-so-anxious Oscar night, because the movie I think should win isn’t even nominated.
Posted by Matt Bird at 8:00 PM

THE MASTER is often interesting filmmaking but as storytelling and especially as screenwriting it seems almost indefensibly abysmal to me. Nobody else I know who likes the film has defended it to me as a great story with compelling character arcs and unexpected yet inevitable outcomes.

I have no argument with the strength of the performances or the immersion in period detail via excellent production design and topnotch cinematography. But I'll have to take serious issue with a number of assertions you make about the film:

1) The idea that what ails Freddie Quell is PTSD or anything like it. From the beginning Freddie's problems seem of an entirely different order from any other sailors/soliders' and in flashbacks we see him as not all that differently damaged before his war service.

2) The notion that his problem is somehow impervious to normal psychotherapy (Why? Because he had a single Rorscach test in a crappy warehouse of a V.A.?)

3) The idea that Freddie even thinks he has a particular problem or is trying actively to solve it through involvement with Dodd. Wouldn't that require some kind of reflective non-animal self-awareness?

I agree that the Quell/Dodd central relationship is compelling to watch but I think it ultimately fails as drama and storytelling because it's never clear what either one of them wants from the other or how, ultimately, either one of them impacts the other. What do they get out of this volatile collision and why has it been worth recounting?

Furthermore, I'd say, the specificity of the period and of both Quell's and Dodd's personal histories has very little to do with what's most interesting about how their relationship plays on screen. How is their vague student/teacher or novice/mentor relationship as such all that different from what it would have been in an entirely different context, like, for example, American business.

The film is full of the kind of imprecise anti-writing that often gives independent/art cinema a bad name -- cinematographic and actorly indulgences, repeated beats, pointless training montages etc. -- to such a degree that it reminds me of what an accomplished writer/storyteller someone like John Cassevetes was. One strong example that still sticks in my mind is the elaborate tracking shot in the department store sequence. It's a bravura piece of work but it ends up signifying nothing, introducing us to a place and a character who will soon be forgotten. It would be as if Scorsese's famous nightclub steadicam shot in GOODFELLAS had been wasted on a minor character's trip to corner store.

And if THE MASTER may have made you sympathetic to Scientology, it did so at the expense of the truth. Like a the opposite of Spielberg's take on Oscar Schindler, THE MASTER's Dodd is not so much ironed out and dumbed down as smartened and ambiguitied up from his less interesting if no less duplicitous model L. Ron Hubbard whose methods and motives were so much crasser.

As I see it, your #3 clashes with your #2, because the first rule of psychotherapy is "You have to want to change", so the fact that Freddy doesn't actively want help is all it takes to render traditional therapy useless. Instead, he meets a megalomaniacal drinking buddy who wants to fix him (primarily as an extreme test case for his methods, secondarily to keep him around and making his addictively potent homebrew), and, against all odds, he responds well to his new Master's nutso methods, slowly realizing how much he's messed up his life and taking steps to try to make amends and move on. Yeah, it's a bizarre story, but I was enthralled.

I get that you have to want to change for psychotherapy to work. But for weird experimental cult therapy you have to want it even more. And I don't think Freddie ever does. He makes a kind of hysterical show at embracing Dodd's methods for that first meeting and one frenetic montage. But there's no evidence that any of this has impacted him in any measurable way, especially since we never have a baseline for Freddie's normalcy, as he's pretty messed up throughout the film.

I don't see the evidence that Freddie responds in any meaningful way to Dodd's methods so much as he responds simply to Dodd's attention. Which is what I was getting at when I said this film's central relationship is actually strangely separable from its purported interest in Scientology.

And does Freddie ultimately embrace change in his personal life? We see him go back to his already married ex-girlfriend's house, where nothing happens. And we see him drop out of Dodd's life in much the same way he's dropped out of every other situation we see him in. How's that growing, changing or moving on? How does it show us any more self-awareness from Freddie?

Does Dodd really want to fix Freddie? Isn't Freddie's animal volatility precisely what he likes about him? So does Dodd actually believe he'll be taming Freddie? And if so, why would he want to do that?

There is s decent movie about how a self-help cult like Scientology might really work for some people buried in THE MASTER. It would have to be about an entirely different character, though, like the one Laura Dern plays, for instance.

She could show us how the right mix personal qualities and demons lead to this: alienation from her culture's traditional values and problem solving techniques (like psychotherapy, Christianity, etc.), a bit of intelligence and autodidacticism on her part, plus an open mindedness and a deep need to be saved.

And then we could also see some of that reversible behavior you're always lauding because it dramatizes change so effectively.

Oh, wait, she's already made that movie and it's an HBO comedy series called ENLIGHTENED.

In all the books I've read about Scientology the one unanswerable question that keeps me hooked is: How much of his own Kool-Aid was Hubbard drinking?

It's the same question I always have about other cult leaders and about dictators too, who usually front for some kind of whacked out ideology as a means to take and hold their power, but often strike me as too smart to believe the bullshit they are peddling.

And the answer seems to be that it varies from moment to moment with Hubbard. That he knew his "religion" was just a fiction created for tax and copyright purposes. And that he knew on some level he was making it up as he was going along and that his convoluted backstory/mythology was kind of stupid. But he did honestly believe himself to be discovering truths and helping himself and others and so he simply cut himself a large amount of slack when it came to literal honesty.

The most interesting bit of dramatic writing in THE MASTER speaks to this ambiguity. Which is why it could be a little unfair for me to say that Dodd should have crystal clear motivations for wanting to cure Freddie or not. Still, for me, in THE MASTER even this line of inquiry remains underdeveloped.

Excellent review of the Master. I agree wholeheartedly. Beautifully written, too. Dad


Thanks for taking the time to discuss this, I feel strongly about it and love learning more on this topic. free movies streaming