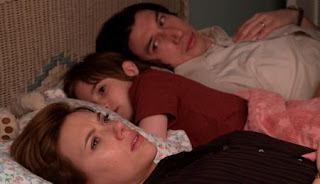 This is, to put it mildly, the best American movie of the year. It is, in fact, the best American movie in several years, since… well, since Lady Bird. And that’s only appropriate, since it’s obvious that one of the factors fueling this movie is Baumbach’s jealousy over that movie’s success. (One of the husband’s final humiliations is when he finds out that his wife has gotten a directing Emmy nomination, despite the fact that he thinks of himself as being the great director of the family.)

Both Baumbach and Gerwig have just turned out movies that aren’t exactly high on the subject of marriage, so who knows how things are going at home, but they’re certainly turning out great work, so I hope that whatever tension they’re feeling remains high!

Before this movie, the great American divorce movie was Kramer vs. Kramer, but this movie easily surpasses that one. That movie clearly picked a side, but this movie has the courage to split our identification (though not necessarily our sympathies) evenly. The result is one of the most heart-rending movies I’ve ever seen. It really wrecked me.

Storyteller’s Rulebook: Create Real Horror Movies. This is the only movie I’ve ever seen that exposes one of my deepest fears, the fear that my kids wouldn’t miss me that much if I got separated from them. The movie makes it clear that Driver is a very good father (with the big exception that he wasn’t a great husband to his son’s mother), but when Johansson’s work takes her to L.A., Driver keeps waiting for his son to miss him and that just never happens. Unlike the kids in The Squid and the Whale, this kid adjusts quickly and easily to his parents’ divorce, and, while that’s great for the kid and mom, it’s unbearably painful for for the father. I think every loving parent has a horrible suspicion that their children are just black holes of love, never intending to give back all that they’ve taken in, and this movie really tore me up inside by showing that fear made manifest.

Storyteller’s Rulebook: Pass the TBS Test. I’ve always felt that every great movie should pass the TBS Test: If you were flipping around the TV (I realize that people don’t really do that anymore), and you ran across this movie on TBS, would you be compelled by whatever scene you happened upon? In this movie, the answer is overwhelmingly yes. (A distinction that was also true of Kramer vs. Kramer, come to think of it.) There are several scenes/sequences that would make compelling short films, and none is more amazing than the home visit from the court evaluator. Driver is, as usual, riveting and squeezes just a right bit out humor out of his agonizing tension, culminating in wonderful bit of subtext-becomes-text when he slices himself open and fails to hide it.
Posted by Matt Bird at 8:00 PM