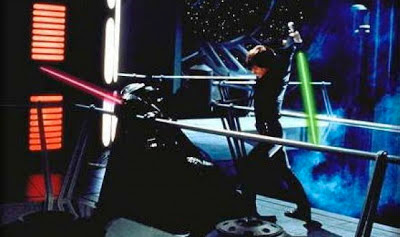 Everybody went into Return of the Jedi rooting for Luke Skywalker to kill Darth Vader.  When the moviemakers chose to redeem Vader instead, the audience was pleasantly astonished.  But what if, in addition to that, Luke had turned evil and Yoda had ended up with Leia?

If you defy too many expectations, then you’ll lose the audience entirely.  Shocks pile up until they become the new normal, leaving the audience just as bored as they would have been if you had stuck strictly to convention.

I loved Wendy and Lucy, and I admired many things about the follow-up by the same personnel, an alt-Western called Meek’s Cutoff, but it was so reliably iconoclastic that it became predictable. Halfway through, I figured out that the movie was so in love with ambiguity that it could only end one way: cutting off abruptly just before the climactic reveal. The ending that was supposed to be shocking just got an eye-roll.*

Most jokes are composed according to the “rule of threes”, in which a situation is repeated twice, then gets turned on its head the third time.  Why three?  Because you have to establish a pattern before you can break it.  If you want to surprise your audience by defying a genre trope, then you have to first lower their guard by delivering a series of familiar pay-offs.

So the question becomes this: how can you deliver on classical genre tropes without resorting to old clichés?  On the one hand, many clichés persist for no good reason, such as, “let’s blackmail a random guy into committing a crime”: it violates common sense and we’ve seen it a million times.  Likewise anything involving assassins, nursery-rhyme spouting serial killers, or cool guys who don’t look at explosions…

But other clichés are harder to get rid of: Why is every heist movie about “one last job”?  Because otherwise, if this heist doesn’t work, there’s always the next one, so who cares?  Why is the hero always unexpectedly forced to work with an ex-spouse?  Because it’s a handy shortcut to add emotional complexity to a situation, and turn obstacles into conflicts.  Why is it always good cop / bad cop?  Because it makes for good character contrast, and it also happens to be true to life.

Not all clichés can be avoided.  The trick is to pull off the clichés in new, exciting ways …which is why our job is so hard.

Once you’ve paid off a few expectations, then you’re free to wallop the audience with something that breaks the rules.  The more time you spend rolling the rock uphill, the more satisfying it is when you knock it back down.

*John Sayles’s Limbo, on the other hand, pulled off the same ending in a shocking way because Sayles, who has always bounced back and forth between Hollywood movies and naturalistic indie fare, knew how to fulfill just enough thriller expectations to get us revved up for a thrilling finale, only to deliver an ambiguous cut-off that forced his audience to decide how we feel about the characters’ decisions, independent of the knowledge of how it all turns out.  Some viewers rose up in revolt, but other enjoyed the self-examination that Sayles demanded of us.
Posted by Matt Bird at 8:00 PM

I think MEEK'S CUTOFF is even worse than you say it is and for many more reasons. It isn't just that it fails to pay off genre expectations in the service of a heavy-handed allegory about the Bush presidency, it's that the story seems to will most of the characters into abject idiocy to prove its theorem. In order for anyone to believe that they would all unquestioningly follow the titular Meek for so long, he'd have to be way more convincingly wrought than he is. I'd say the film's also too ambiguous about the stakes for the settlers: Are they actually lost? Are they really perilously low on water, or just kind of running low? How dire are their circumstances?

Still I was prepared for the film to save itself through a high-wire act of bravura direction, the way DRIVE did. I was hoping for an inspired use of duration and of the poetry of the terrain, something along the lines of Bela Tarr, Chantal Akerman or Gus Van Sant. But MEEK'S CUTOFF isn't even up the standard of your average Anthony Mann or Budd Boetticher Western in terms of its visual beauty and feeling for the landscape. Too many stilted shots follow one another like clumsy intellectual ideas of what slow cinema means.

Why is every heist movie about “one last job”? Because otherwise, if this heist doesn’t work, there’s always the next one, so who cares?
----
Then why is the Romantic Genre still around?