How to Manage Expectations, Step 4: Set the Mood

Time for more fun with fuzzy definitions!  What I’ll be talking about today is sometimes called “tone”, but I’m using that term more broadly to also include genre, foreshadowing and more, so I’ll refer to this sub-category as “mood”... 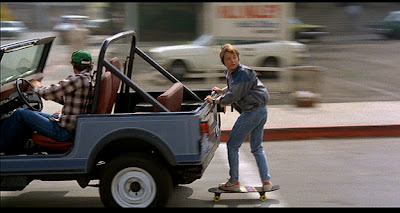 So we’ve talked about how genre adds one set of limitations, and sub-genre another. So once you’ve accepted those, are you now free to tell any story you want? Au contraire. Your movie also needs a mood, and that mood (Light, Dark, Satirical, Zany, Post-Modern, Over-the-Top, Gentle, Harsh, Chaotic, Intense, Meditative, Lurid, Fairy Tale, Bittersweet, Pulpy, etc.) can be just as confining.

To a certain degree, when it comes to TV and moviemaking, this is up to directors and their collaborators, who get to create or amplify these moods through cinematography, score, pace of the editing, etc. There are certainly lots of examples of directors adopting a mood that was totally contrary to the intentions of the original script, for good or ill.

But don’t leave it all up to them. There are lots of subtle and not-so-subtle ways for you to establish the mood yourself on the page.

One of the most obvious and successful, as I pointed out before, was the opening title card of Star Wars: “A long time ago in a galaxy far, far away”.  What makes this work so brilliantly is that it establishes what this movie is and also what it’s not.  It’s going to be about swordfights and rescuing princesses, not airlocks and explosive decompression.  See also: (500) Days of Summer, wherein an omniscient narrator states at the beginning: “This is not a love story.”

But you needn’t be so direct.  On a more subtle level, your early scenes convey to an audience, “this is the kind of movie where this sort of thing happens and doesn’t seem weird.”  As a kid, I fell in love with Back to the Future as soon as Michael J. Fox grabbed onto the back of a jeep while he was on his skateboard, then, to up the ante, switched over to hanging onto a cop car.

This scene had nothing to do with the plot, but it had everything to do with setting the mood: In real-life this would be totally suicidal, but this movie was set in a universe where the laws of physics were a little gentler, and rebellious teen misbehavior was all in good fun.  No matter how much trouble was about to ensue, it was probably going to be okay.  That’s why Doc’s last minute resurrection feels like a satisfying pay-off, instead of a cop-out.

Of course, sometimes, this message comes through too loud and clear: I discussed before how an opening scene from the pilot of the TV show “Leverage”, in retrospect, made it all-too-obvious that this show’s tone would be terminally trivial.

On the other hand, I sometimes find, when I’ve gone back and re-discovered good shows that I initially dismissed, that one misleading scene early on gave me the wrong impression about what kind of show it was going to be. The scene that ends the pilot of Game of Thrones gave me the false impression that it was going to be another show like Rome or Boardwalk Empire, in which lead characters casually killed innocent people and the audience was still supposed to sympathize with them. When I gave the show another chance, I discovered that nothing could be further from the truth.

Be very careful in those opening scenes: your audience is on guard, asking themselves: “Is this going to be that kind of story or my kind of story?” Let them know the answer right away, so that you can self-select an audience that wants the sort of mood that you’re prepared to deliver.
Posted by Matt Bird at 8:00 PM