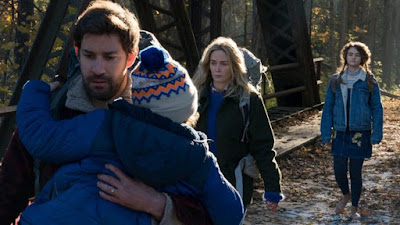 When I do these lists, I tend to go back and forth between having 5 and 10 movies, depending on how strong the year was …and some years I split the different by declaring movies 6-10 to be runners-up, as I’m doing this year. This is largely just because I don’t have enough to say about these five to fill entries, but I’ll do a little...

10: BlacKkKlansman This movie was a lot of fun and also a timely tale about the mainstreaming of hate, but ultimately I found it to be too predictable and the lead too uncharismatic. Nevertheless, Lee’s direction is wonderful as always, and I’d love to see him win Best Director for old time’s sake. I had another issue with this movie that I’ll talk about in contrast to the #3 movie.

9: Paddington 2 This was the best reviewed movie of the year with good reason -it’s absolutely delightful- but its pleasures were perhaps a little too small-scale to finish higher on the list. Brendan Gleeson definitely deserves an Oscar, though.

8: Infinity War No movie thrilled me more or hit me harder in the gut. It was a cheap hit, because they’re obviously going to undo it all, but powerful nonetheless. Thanos is one of the all-time great villains, at least so far.

7: A Star is Born I hate to reward a fourth-time-around remake, especially since it’s nowhere near as good as the 1954 version, but this movie, judged on its own merits, works spectacularly well. Cooper and Gaga both felt like real flesh-and-blood people, which is pretty amazing given how melodramatic the story is.

6: A Quiet Place A masterfully-made white-knuckle chiller. And I actually found a Rulebook Casefile:

I’ve talked about how superhero movies have a Klan problem, but of course by the same token, post-apocalyptic movies have a survivalist problem. If America is actually invaded, then those living off the grid with big gun stockpiles will look pretty smart, but liberal filmmakers such as myself don’t want to tell that story, so we have to come up with apocalypses that don’t reward gun ownership …such as aliens that attack loud sounds. Even in this case, where the writer/director/star seems like he’s probably a right winger based off other projects he’s chosen, he knew that it would be more fun to have unique villains doing a unique attack that had to be defeated in a unique way.  We’ve talked about how you should come up with ways to hurt your hero that would only hurt your hero, well I guess it also works the other way: Come up with ways to defeat the invader that would only hurt this invader.
Posted by Matt Bird at 8:00 PM

Labels: Best of 2018, Best of the Year, Rulebook Casefile