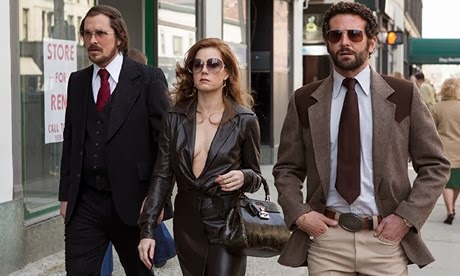 Let’s finish that Wayne Newton scene from “American Bullshit” we started on Monday: 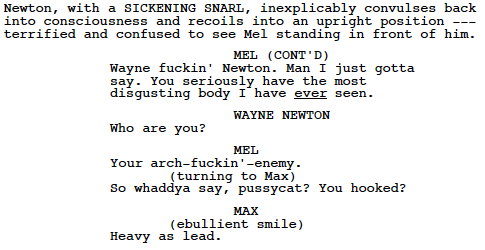 One way you always know you’re reading a testerone-soaked spec is when there’s only one major female character (the wife is barely there in this version, and even the mistress has a much smaller role) and she has a man’s name, so that the writer doesn’t have to switch into “girl mode”. Thus we have Mel and his mistress Max (Note to writers: Mel and Max aren’t easy names to tell apart on the page!). It would feel weird to put these manly-man lines in her mouth if her name was Louise...and there’s a good reason for that.

This speaks to a bigger problem with these scripts: everything is generic, not specific. Nowhere is this more clear than in the defining quality of this script: the violence. These scripts always have a lot of squishy, bizarre violence, and I could pick any (including ones that involve, yes, excrement), but let’s go with the first scene...

Both the original script and the finished movie begin with a later crisis and then flashback to the beginning, but the choices of scene are instructive. The opening scene of the screenplay plays like someone made a teen spoof called “Tarantino Movie”: Mel is called brought before a sinister but blasé mobster, who recommends the cheese from his local village in Sicily. Our cocky hero responds: 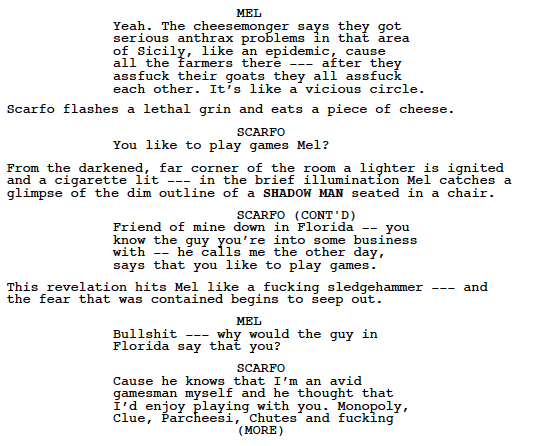 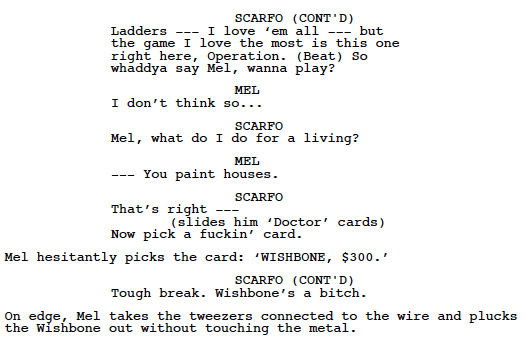 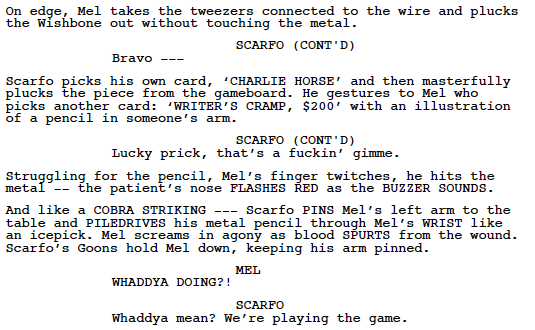 I don’t want to live in a world where some reader finished this opening scene and nevertheless kept reading, but here we are! This is the definition of generic thinking: The action of the scene is one man stabbing another man’s hand, but you have to come up with an original way to get there…so let’s see, what pop culture reference from our childhood hasn’t been over-used yet…I’ve got it: Operation!

You could plug any lippy hero from any thriller into this scene. Compare this to the scene that begins the finished movie: The big moment of violence is when one man touches another man’s hair…and yet the impact is tenfold! We’re only five minutes in, and we already understand that a hair touch is worse for this guy than a mere stabbing. Write scenes that are specific to your characters!

And One More Rule From This Movie: Read Your Dialogue Out Loud Before Your Ask Anyone Else to Say It

Presented without comment, two actual lines from this screenplay:
The horror.  The horror.  Okay, enough of the script.  Tomorrow, let’s move on to the movie and wrap this up.
Posted by Matt Bird at 8:00 PM

Funny that you peg this scene to a bad Tarantino rip-off. The man himself has been known to be an avid collector of board games and has even supposedly held business meetings over them, like inviting Oliver Stone to come make peace (after some public blow-ups about NATURAL BORN KILLERS) by playing the PLATOON board game, the mere existence of which is quite possibly even in worse taste than the scene you've posted.

And didn't he decide to cast Travolta in PULP FICTION after inviting him back to his house to play the WELCOME BACK, KOTTER board game?

Just the title of this post on its own is a great piece of thought. Its one of those things you know intuitively, but can't really own until you can articulate it. Thanks.

There is an irony to subjection in that when it corresponds to our own individual perception we tend to see it as objective... With that being said the academy awards was very telling this year. Gravity having the most honors and 12 years winning best picture, while American hustle lost in every category it was nominated for. What does that teach us? Does it mean American hustle was a bad film? Absolutely not. However it shows us that style can never ever eclipse substance!!! American hustle had the swagger but it didn't have the heart. I agree with almost all of the decision made tonight by the academy. Gravity was the most honored and rightly so, because in the end cinema is a visual medium and that movie (gravity) could never have worked in any other form than cinema. 12 years was already a book and it was transformed int a great movie, and American hustle was based loosely on a famous scam in history. But gravity was pure visual storytelling. Did it leave something to be desired? Yes I think so the characters was a little 2 dimensional, but it was necessarily for the ambition of the film. I think what ultimately doomed American hustle is that it felt too much like a Scorsese rip off. Not saying it was one but it was goodfellas 2.0 sorta kinda but not as good. The casting against type also made it hard to award American hustle. Yes all the leads gave outstanding performance but they were fighting against themselves in order to do so. Which is mirrored in your post about American hustle. You constantly remind us how good the movie is in spite of it's bad script. Well this movie does everything wrong and in the end it turned out alright but that's not the way to make movies because it removes deliberate meaning from the equation and tosses everything in the air hoping for luck. Gravity felt deliberate, 12 years felt intentional, but American hustle felt lucky. My favorite moment was when Lupita nyongo won for 12 years a slave. Even if the film received no other awards her victory seemed to encapsulate the spirit of the whole film and her performance carried the weight of that film even more sooo than the lead actor in my opinion. I doubt these award results will alter your opinion of the movie American hustle because I still believe for many reasons that you are a "fan" (which isn't necessarily a bad thing)

If he persists with the ill thought out and unformatted rants, hope you'll consider labeling LG a troll and either blocking him or deleting his comments as they appear.

I didn't even need another reason to love Tarantino, but I'm excited to find out we have something so silly in common. Now "Playing board games with Tarantino" is going on my "impossible dreams" list.