What's the Matter with Superheroes, Part 1:The Klan Problem

So I really liked the first two episodes of Netflix’s “Daredevil”, then disliked the next two, then skipped to the last one, which didn’t make me want to go back and watch the others. (I know, I know, I’ve been told that I missed the best stuff.) It seemed like this series was Marvel’s attempt to merge their sensibility with Christopher Nolan dark, gritty superhero-realism, and it worked far better than it had any right to, but ultimately failed for me.

The problem is this: Both Batman and Daredevil seem on first glance like ground-level heroes who can be given a more realistic treatment, but you quickly run into big problems, both logically and thematically.

As I watched the series, it just so happened that I was reading “The Wars of Reconstruction: The Brief, Violent History of America's Most Progressive Era” by Douglas Egerton, and it made watching the show into a queasy experience. Quick Quiz: Who’s talking here?
If you guessed “Daredevil and Batman”, you’re correct! And if you guessed “the Reconstruction-era Ku Klux Klan”, then you’re also correct! 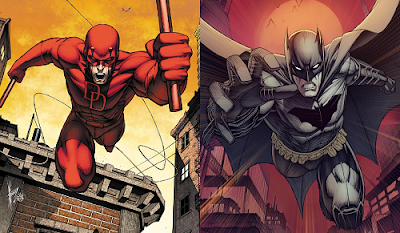 Both the Nolan Batman films and the Netflix “Daredevil” series demand that we constantly ask ourselves, “What would I do in that situation? What’s the next logical step?” The problem, of course, is that the answer they end up with is not one that any sane person would arrive at. So either you have to show that the heroes are insane, or you have to put them in such an extremely evil world that their actions make sense. Unfortunately, the world you’re creating is uncomfortably similar to the world that exists in a Klansman’s head.

One of my favorite moments from those first two episodes of “Daredevil” was a flashback to Matt’s childhood in which his father encouraged him to take a swig of whiskey. That takes a big load off the story, because it opens up the possibility that this guy was simply raised wrong, which allows his actions to be less logically-motivated.

But I felt like the show’s biggest mistake came when DD finally graduated to a real superhero costume at the end and they felt the need to explain that it was simply necessary body-armor...with horns, for some reason. Ugh. Please don’t pretend that this is logical. Ultimately, there’s only one good reason to wear a superhero costume: Because of course you would. That’s it. Either you live in a world where costumed heroes make sense, or you don’t. But if you try to make it make sense in our world, you have to make some very unpleasant assumptions.

More on the dangers of superhero-realism next time…
Posted by Matt Bird at 12:00 PM

Hey Matt! Have you ever thought of doing an ultimate story checklist for a movie that wasn't very good?
I think it could be interesting to see why certain movies aren't very effective.

Hi Matthew, I certainly have, for that reason, but I've put it off. "Green Lantern" would be the one, I think.

Oh that would be a great one! Looking forward to it.
The idea came to me while watching "child 44" today. Never have I seen a movie that fell as flat as that one.

To be fair to it, it's a pretty compelling read as a book, but, for oh so many reasons, a disastrously bad idea for the sort of movie it turned into. Richard Price adapted the film and probably did the best he could have. But most of his non-THE WIRE screenwriting is really just about paying his bills while he spends 3-4 extra years past his deadlines writing novels as good as THE WHITES.

I can imagine the book was great. its just that in the film the plot doesn't kick in until the 3/4 mark, by which time you're already hating the movie for wasting your time. Not to mention all the massive plot holes that were probably dealt with in the book. At one point the two leads are trying to get past some kgb gaurds who are checking papers in a train station. The main female character points out one of the gaurds and tells her husband, "he cant read."
Sure enough the gaurd let's them through and I laugh out loud in the theater.