Not on the Best of 2018 List: Spider-Man: Into the Spider-Verse 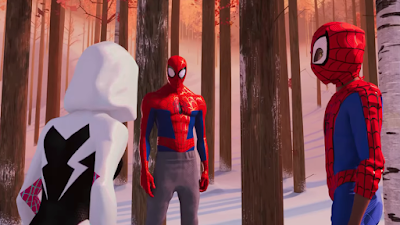 Every few years a movie comes out that everybody absolutely loves, but I find I don’t love it, or even like it, and in fact I can’t imagine how anybody could like it. There were so many reasons I disliked Into the Spider-Verse:


I suppose there were elements of the movie that were appealing. Miles was likeable. His relationship with his dad was well written. Nicolas Cage was funny. But, for the most part, I thought this movie sucked, and I’m so, so completely baffled at the love it’s received. Not on the list!
Posted by Matt Bird at 12:00 PM

"So doesn’t that violate the whole concept? Why is our Earth the only one with two Spider-Men, and how did it get two?"

Why would that violate the concept? How is having a world with a successor to Spider-Man stranger than a world where a spider was bitten by a radioactive pig?

"Miles is bitten by a seemingly-normal spider in a subway tunnel. There’s none of the explanation we get in other movies about a radiated or genetically engineered spider. [...] no explanation of how Miles got his powers is given."
It had a number painted on it's back. I thought it was fairly obvious it was an experimental spider similar to the one that got Peter. I assumed it was tied to Alchemax, but I don't recall if that was stated. If we don't get more detail than that for the many other Spider-origins in this film, then why is this particular shortcut not okay?

"can you explain to me why Spider-Man can turn invisible? Or shoot electricity? Isn’t the whole concept of the character supposed to be that he has the powers of a spider? Why mess with that?"
The "sting" and camouflage are both based on actual spider abilities. See an interview with his creator:
https://www.cbr.com/commentary-track-bendis-on-ultimate-comics-spider-man-2/
And, again, why is a fairly random power like "spider-sense" given an out, but these two that have a stronger basis in spider-abilities not okay?

"Just because the writers said, “Hmm, how to get him out of this? I know, we’ll just give him electricity powers!” Is there any other explanation other than laziness?"
Setting aside the above, he's based on an existing character with those powers. So what would screenwriter laziness have to do with anything?
https://en.wikipedia.org/wiki/Miles_Morales

"We’ve already had two kingpins"
Are you counting the Daredevil TV show or something? We've never had Spider-Man meet Kingpin in a film before now, and Kingpin is traditionally a Spider-Man villain.

"Aren’t you people tired? Am I the only one that’s tired?"
It's hard to get too tired of good movies.

Thank you for answering my questions! It's good to know these things do have answers, though I can still gripe that these things weren't obvious to me, despite being a comic-book guy.

I've never enjoyed the comics of Brian Michael Bendis, so I've never read any Miles Morales comics, so I didn't knew he had invisibility or electricity power in the comics. I guess you're right that it's no odder than spider-sense.

I'm not a fan of BMB's team or event comics, but his run of Ultimate Spider-Man (both Peter and Miles) is well worth reading.

I likeded Spider-verse mostly because of it's aesthetics. I love the art direction, it's unlike anything I have seen before.

As for the spider man exhaustion, I didn't bother watching the other spider man movies so it was no problem for me.
I actually dislike live action superhero movies, even the “good” ones. Super heroes are and inherently silly idea and I could never truly suspense my disbelief.
You take the same silly premise and put it in an animated film and suddenly everything makes sense. A stylized medium can deliver stylized stories a lot better. I am not much of a comic reader so Spider-verse was the first time I could really enjoy a marvel super hero movie.

I wonder if the rushed over origin of Miles has something to do with how Miles has been part of the Marvel universe for long enough now that my kids just know him. He's been in both Spider-Man TV cartoons, the avengers comic books from Free Comic Book Day, the toy line etc. We didn't need to see it again, in the way they skipped over it in Homecoming.

Also, being tired of Kingpin or Green Goblin is like being tired of the Washington Generals or people named Darth something. It's part of the world. If you don't enjoy the world, fair enough. Spider-Man has often had three monthly comic books, as well as guest-starring in other comics, so if anyone gets spread thin, it's traditionally been him.

I think Green Goblin was a great choice, because he's tied to the original Spider-Man, who he kills (and accidentally causes the parallel universes to be connected to Spider-Man by getting Peter caught in it). That's using familiar territory to bring us into newer characters the mainstream audience is less familiar with. If they had a whole new villain, audiences might find it too unusual.

Kingpin is also a great villain because a) he's not Vincent D doing his Christopher Walken impression b) he's a physically imposing white male authority figure c)he is a dark mirror of Spider-Man. Peter's actions caused his loved ones deaths, so he decided to do his best to ensure no one else felt the same loss. Kingpin's actions caused his loved ones deaths, so he is devoting his life to bringing them back, stripping them from another character who will experience their loss, rather than change who he is. Miles doesn't have the same origin, but that motivation still thematically ties into the Spider-man universe.

I liked this movie for the same reason I liked HOMECOMING (and hated INFINITY WARS): it showed an understanding that Spider-Man is a fundamentally "small-s" superhero. Yes, I know he ended up in a conflict to save a multiverse, but The movie never lost sight of him being a teenager with teenager problems. I don't read the comics anymore, but from what I can tell, Miles was a necessary corrective for a Spider-Man who had drifted too far from his roots (the kid with girl problems is now married to a supermodel ... the kid who can't pay for Aunt May's medication is now personally bankrolled by Tony Stark's R&D division). I welcomed the change.

I do think that as funny as some of the alternate Spider-Mans were (Nicholas Cage among them), they tonally broke the world in a way that deflated the stakes.

Thank you! I'm not crazy. I wonder if I would've liked the movie better if I wasn't so annoyed with the headache-inducing visuals.

From my previous comment:
"It had a number painted on it's back. I thought it was fairly obvious it was an experimental spider similar to the one that got Peter. I assumed it was tied to Alchemax, but I don't recall if that was stated."

Finally watched it again. The spider had "Alchemax" written on its back next to the number.

In addition to what Ishmael mentioned, the spider at the beginning was also shown "glitching", as the multiversal characters later in the movie do. So this primed the audience to know that it was not a normal spider.

I agree with Jonathan above, as much as I thought the techno, noir, and pig spidermen (spiderthings? spiderfolk?) contributed some neat gags, there was a somewhat jarring tonal shift once they were introduced. (and the pig was not that funny, sorry!) Oct 20 2019