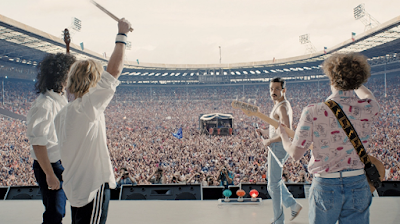 Okay, the Oscars are almost two weeks away, so we’d better get started on some year-end write-ups. I thought there were no capital-g Great movies this year, but there were a lot of very good ones that I’d like to spotlight.

(As usual, I should begin by pointing out that I haven’t had a chance to see many of the movies that are showing up on other year-end lists, such as The Wife, Cold War, First Reformed, The Ballad of Buster Skruggs, Eighth Grade, Sorry to Bother You, Hereditary, Zama, Burning, Leave No Trace, At Eternity’s Gate and Destroyer.)

Okay, last year I began spotlighting why some movies didn’t make the list, so let’s start with:

It’s interesting to look at which historical inaccuracies I’ll let a biopic get away with. In this case, I went along with the big change, but one tiny 20-second scene ruined it for me ...and made me howl with laughter.

For the most part, the writers have found a great biopic subject whose life lends itself very naturally to classical story structure. An awkward gay Zoroastrian finds a band where he can be a star, experiences many glorious years, falls into debauchery and drugs, ditches the band, realizes that he’s messed everything up, finds out that a charity concert wants the band to get back together, humbles himself, crawls back to them, and then they have a triumphant concert.

But the writers decided to make one big change: The real Freddie Mercury would find out two years after the reunion concert that he was dying of AIDS. The writers said “Gee, what if we move that up by two years? It makes it much more dramatic that he now has one last chance to get the band back together, doesn’t it?”

And you know what? I’m fine with that. I’ll grant dramatic license for the purpose of a more satisfying movie. And after all, Mercury must have suspected already in 1985 that he was in serious danger, if the movie is to be believed about how much anonymous gay sex he had in the early 80s, a time when transmission was rampant and every gay man knew dying people. So I’ll go with it.

No, my problem was with a super-brief scene that would have been so easy to cut, but they just couldn’t help themselves. I have no problem with getting some mileage out of the fact that Live Aid was a charity concert (they show organizer Bob Geldof making a plea for a million pounds in donations), giving a heroic patina to the performance and allowing Mercury to tell his father that he’s finally living up the Zoroastrian call for good works. But they’ve made clear that all the greatest musical acts in the world are performing at the concert, and they list them, and they show that Queen has to shoehorn themselves into a line-up that’s already been finalized. The movie accurately portrays that Live Aid does not need Queen.

But just before Queen goes on, they felt they had to include a scene where Geldof goes back to the phone bank and sees that seemingly nobody has called to make any donations so far. The concert is a failure! Then Queen comes on, and the lines light up! In ten minutes, they’ve suddenly reached a million pounds! To put it mildly, I didn’t buy it. It’s funny that I was willing to go along with the big act of dramatic license, but not a small one, which just made me laugh out loud and say “This is manipulative bunk.”

Malik and the music were great, though. And I’d love for it to win Best Editing.
Posted by Matt Bird at 8:00 PM

I actively avoid biopics. TheyTconfuse me and I don't really understand why they exist. It seems to me like either people want to know a true story, in which case they want a documentary, or they want fiction, in which case why have one of the characters be Freddy Mercury or Jim Morrison or whatever. The thought of ever wanting a counterfeit emotional experience so badly that I want to see real famous people in fictional situations that I'm pretending are real,and also in some real situations, only I don't know which is which, well, it makes me queasy.