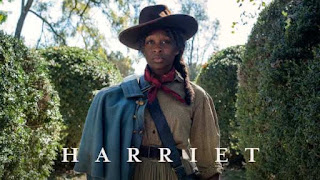 This is certainly the most essential movie of the year, in that this is the story that most needed to be told. Harriet Tubman is the greatest hero in American history and she’s only now getting her biopic. And it’s perfectly fine. It does the job of telling this story, and it’ll be a good choice to show in schools from this point on. I just wish it was more artfully made.

The score (by the usually great Terence Blanchard) is ham-handed. The cinematography is very flat. This was obviously going to be a very hard movie to light, since Tubman’s whole trick was that she would travel through the woods on moonless nights, and thank god they didn’t shoot it day-for-night (You scoff that they never would have done that, but X-Men: Apocalypse had a day-for-night scene set in the woods at night, and that movie came out just three years ago), but their solution is just to have big blue flood lights on at all times, so bright that even when people light lanterns those lanterns cast shadows. How I wish this movie could borrow the cinematographer from Little Women. Even better, imagine this movie had been shot like The Revenant (another big-19th-century-foot-trek movie).

But ultimately, my big concern is Tubman herself, both in writing and performance.

Cynthia Erivo is fine, and I don’t mind that she got an Oscar nomination, but ultimately I wanted a performance with a little more interiority. Ten years ago, I gave this advice to actors and actresses: Always look like you’ve got a secret. Harriet Tubman was a woman with a lot of secrets, but Erivo plays her as too much of an open book.

In terms of the writing, I feel like the major turning point in Tubman’s life was the moment when, after years of asking God to change her owner’s heart, she reluctantly asked instead that God take his life, and the man unexpectedly died the next day. That, understandably and correctly, convinced her that she had superpowers, and she acted accordingly from that point on. The prayer is in the movie, but the camera isn’t even on Tubman at the time, it’s on her owner’s son. And we don’t see her find out that the owner is dead. We never get that “Holy shit, God does what I say, this changes everything” moment. That’s Tubman’s secret, and I wish it fired up the movie more.
Posted by Matt Bird at 8:00 PM