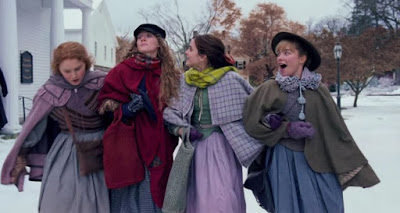 Going into this movie I couldn’t help but think about the fact that “Little Women” had a distinction that was not shared by any other Great American Novel: It already had three excellent film adaptations (1933 with Katherine Hepburn, 1949 with June Allyson, and the very best: the 1994 version with Winona Ryder) so who needed another one? Unfortunately, after watching it, I still feel that way.

This is, in many ways, a great film. The cinematography is absolutely gorgeous (Oh how I wish I could take this movie’s cinematography and transfer it over to Harriet!) The performances are great (though in almost every case, the performances in the 1994 version were even better), but it never drew me in all the way.

What ultimately alienated me from this version is the timeline-rearranging. I spent the whole movie trying to figure out why Gerwig did it and I never came up with an answer. The plot turns in the book are so moving, so why spoil them all up-front? And it put Gerwig in the position of having to work hard to differentiate Beth’s two illness, which now play out simultaneously. She did so with the tired trick of color-tinting one blue and the other gold, which drew attention to itself and still didn’t work.

As for the big change to the ending of the story, it’s fine. Alcott intentionally chose to disappoint the reader, and by doing so she made a powerful statement about women’s choices in the 19th century, but Gerwig (like lots of modern readers) couldn’t accept that disappointment. She wanted a more heroic ending, and she cleverly found it by borrowing from Alcott’s own life-story. As it turns out, that does indeed make for a satisfying ending, and one can hardly criticize Gerwig as not being true to the 19th century, when this is the version that really happened. It’s a neat trick. (Of course, at some point we’ll get a fifth version which acknowledges the real possibility that Jo is lesbian and/or trans, and then this one will look dated.)
Posted by Matt Bird at 12:00 PM