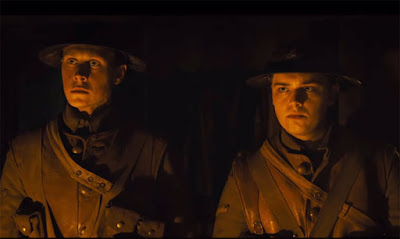 Like Dunkirk, this is a showy technical achievement that still manages to be an impactful tragedy. I thought this film rose above that one through its performances. This one follows the same strategy of getting name actors to play the higher-ups while the youngsters are played by new faces, but I thought Dean-Charles Chapman and George MacKay were far more compelling than the young stars of Dunkirk.

Tip: Give Them Ironic Motivation

This movie does something interesting. It gives Chapman a personal motivation for his mission (which felt a little contrived): if he succeeds he may save his brother’s life. Despite knowing that, MacKay, worried for his own life, says maybe they should refuse orders. Then the movie kills off Chapman halfway through the mission. MacKay didn’t feel he owed it to Chapman to help save his brother when he was alive, but he does feel that obligation once Chapman is dead. That’s nicely ironic.
Posted by Matt Bird at 12:00 PM