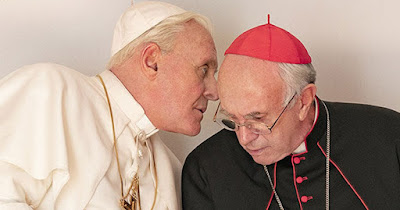 One of the best surprises of the year, highlighted by two amazing performances: How wonderful to see Hopkins gleefully rediscover skin-crawling creepiness and Pryce get to play a genuine hero for the first time in years (though both popes turn out to be more complicated than they first appear.) (It’s fascinating to compare Pryce’s performance here to “Game of Thrones” where he got to play the evil version of the same character, and did an equally good job.)

Tip: Give them a Fit Bit

The play, as far as I can tell, just consists of two men, a pope and a pope-to-be, sitting in a room and talking for two hours. The movie has to “open the story up”, and it does so in various expected ways (It adds little moments away from the confrontation, it dramatizes the stories Francis tells about his past, etc.) but it also uses a trick I found amusing: Benedict is wearing a Fit Bit, and, as anyone married to a Fit Bit user knows, it’s constantly telling him he has to get up and walk around, so the two keep having to get up and walk from room to room (and of course these are some of the most spectacular rooms in the world). It’s a good humanizing detail, and it livens up the visuals at the same time.
Posted by Matt Bird at 12:00 PM