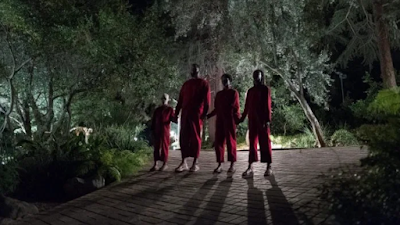 A Saturday post?? It’s been almost ten years since I did that! Folks, there’s been a shocking turn of events: I unexpectedly got a chance to see one of the movies I hadn’t seen and it’s upended this list! This was going to be movie #5, but now it’s been knocked down to runner-up status, and if I’m going to finish all these before the Oscars, I’d best cover this one today!

Parasite isn’t on this list because it seems silly to see just one foreign-language film and say that was the best one, so I decided to limit myself to the best English-Language films of the year. But I did see it, it is amazing, and it makes an amazing companion to this film. Talk about great minds thinking alike! Both have two four member families, one living below ground and the other above, both involve a plan by the underground family to displace the aboveground one. They’re both great movies, and I just think it’s a shame they came out the same year because I fear that the similarity cost this one an Oscar nomination.

My one concern: This has one of the all-time great “Everything you know is wrong” twists, but I was never sure about its placement. It’s revealed at almost the very end of the movie, after it’s too late to affect any of the heroine’s actions. (The Sixth Sense reveal also happens at almost the very end, but in that case the hero acts.) Basically, this movie is saying “Sorry, but you have to buy another ticket and watch it again now that you have this essential piece of information that will change the way you see everything.” I haven’t had a chance to revisit it yet, but if Get Out is any indication, I’m sure it will only grow in my estimation on subsequent viewings.

Tip: Exhaust the Plot, Then Escalate

In the first half of this movie, the four members of the family go face to face with their doppelgangers, and the viewer assumes that that will be the whole movie, and it feels plenty satisfying. But then they successfully escape to the nearby lake house of their friends …only to discover that their friends have been killed by their own doppelgangers! It’s an escalation of the action, an escalation of the danger and it’s an escalation of the the theme, going from a personal horror story to a broader societal critique, and it’s absolutely thrilling to the audience.  Most horror movies have diminishing returns in the second half, but this movie is just getting started.
Posted by Matt Bird at 11:45 PM