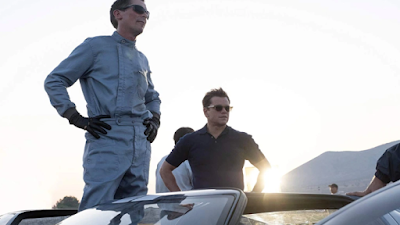 I do have ten movies this year, but I’ve decided to go with five ranked movies and five unranked runners-up, presented in random order. Some are movies I didn’t respond to as much as I wished, but were undeniably worth watching. Others, such as this one, were ones I unabashedly loved but can’t justify ranking above the others, so I’m staying unranked this week.

Ford vs. Ferrari (As with all my write-ups, this will have spoilers)

A great old fashioned man’s-man sports movie, thrillingly shot, scored, and edited. I’ve always found Mangold to be overrated (I didn’t like Logan, as you’ll recall), but this felt like a real breakthrough for me (at least in the coveted category of “pleasing Matt Bird”). You all know from my previous lists that I love Bale and Damon, and their riveting performances here (in roles that aren’t very showy) show why they’re my favorites.

Tip: Sports Heroes Should Win By Losing or Lose By Winning

You know I love irony, right? That’s come up before. Of course, sports movies always risk being unironic. Trying to win and then winning is unironic, but trying to win and then losing just feels like a bummer. The solution, of course, is to find a more ironic (and thereby satisfying) choice: Either win by losing or lose by winning.

The writers of this movie found a true story with a wild ending that’s packed with irony. They spend the whole movie (including the title) preparing us for a big showdown with Ferrari …but then Ferrari is eliminated before the final race ends! So then what the hell movie are we watching? But then Bale must confront his real demon: his self-destructive pride. His corporate bosses make an outrageous demand of him, and he at first refuses to comply, but then he realizes it’s time to let go of his pride and share the win. In the end, he officially “loses” the race, but he’s won by losing. Agreeing to share the win shows that he’s not a jerk anymore.
Posted by Matt Bird at 12:00 PM

I was surprised by this as well, having not been a huge fan of Logan. It's thrillingly shot, but what I loved were the tiny details in the script. I live in Birmingham, UK, so hearing Christian Bale's dialect asking for 'a ham and cheese cob' and 'a fizzy pop' was just lovely to hear.

Is that his real accent or was he putting it on?

What is a ham & cheese cob? It sounds good but I can’t find a recipe from that description!

Is it simply what Americans call a “ham & cheese sandwich?”