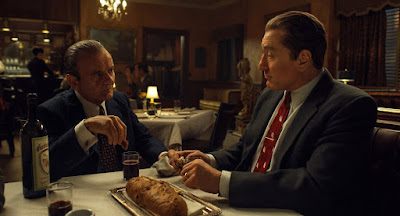 Welcome to my annual series about the best movies of the previous year!  As usual, I’ll start with a list of the movies I didn’t get a chance to see. The big one is Jojo Rabbit. I was supposed to get a screener in the mail and it never arrived. Also unseen: Uncut Gems, The Farewell, The Lighthouse, Judy, Bombshell and several others I’m forgetting to mention.

Next, as has become a recent tradition, I will spotlight just some of the movies that are pointedly not on the list. If you have no wish for negativity, come back on Sunday when I will start celebrating the best!


Not on the List: Once Upon a Time in Hollywood

"They should have just restored things back to the point of the snap! Yes, it would have felt odd for Tony to wipe his own kid out of existence, but refusing to erase five years of horrific trauma for everybody in the entire universe is worse, Tony!"

Here's the catch in the context of the film:

If you mean undo history, they established clearly that that's not possible. Re-writing history only creates a new branch of reality and allows the current one to continue. (And I've been reading science textbooks since the 90's that explained this is how time travel would likely work, so good on them to stick to that, other than a little tacked-on Infinity Stone wonkiness.)

If you mean overwrite the state of the present with the state of the past, isn't that kind of horrifying on its own? Wiping out five years of memories and changing everyone to what they were before. I really don't see how leaving people with traumatic memories is "worse" than that?

And bear in mind you wouldn't just be removing Morgan Stark from existence. Over 5 years if the birth rate is half what it is now, nine million people would've been born. So that means "resetting" things would kill, again, *nine million people*. Again, how is leaving traumatic memories in place worse than that?

They've got omnipotence and they can't do it? Everybody came out of that movie saying "What about all the people who were in airplanes?" and the filmmakers were put in the position of saying, "Well, the Hulk was omnipotent at the time, so he individually chose on a case-by-case basis where to set everybody down safely ON EVERY PLANET IN THE ENTIRE UNIVERSE" and that's easier than just finding some way to undo the snap?

I recently tried to watch The Irishman and watched Once Upon a Time in Hollywood the next day.

Your analysis makes me feel deeply vindicated for disliking both movies and for being stunned by the effusive praise being heaped on both of them.

I found The Irishman boring. Period. Turned it off after 25 minutes with zero regrets.

Hollywood was more watchable but I felt exactly as you regarding the performances. I felt the movie as a whole was lacking in substance. The "aging star" storylines seemed to get muddied with other stuff and I'm genuinely shocked that Pitt is receiving accolades for this performance. And like you, I liked the music, so much so that I bought the album.

IMHO, this is the problem: for a good 20 years, many American films have inadequately developed characters, relying instead on a single, sketchy moment to define the character entirely before getting on with the plot. These films may have interesting individual scenes but the films don't come together as a whole. Due to this absence of genuine character development, critics and audiences, who desperately want to enjoy their movie experience, are not seeing these films as they are but instead as they wished they'd be. It's the only explanation I have for review quotes like "Once Upon a Time in Hollywood is a loving homage to the final throws of the golden age of cinema and pre-Manson LA." There was some of that in the film but I was distracted by all of the shots of the back of people's heads as they drove down the street.

Backs of heads and bottoms of feet!