Rulebook Casefile: The Writer Gives the Villain Her Humanity in “Lady Bird” 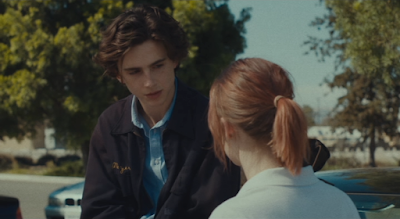 One thing made me a bit uneasy about “Lady Bird” as I watched it. Kyle (Timothy Chalamet) is the movie’s caddish villain, but we first meet him reading “A People’s History of the United States” and we know he’s getting his hooks into the heroine when she reads it too. Later, when she accuses him of tricking her into sex, he attempts to change the subject by saying, “Do you have any awareness about how many civilians we’ve killed since the invasion in Iraq started?” (And Lady Bird wisely says “SHUT UP. Different things can be sad. It’s not all war.”)

But I watched and thought “Hey, I was the kid who loved that book, and I opposed the previous Iraq war when I was in high school …Am I the bad guy here?” But I could tell the movie wasn’t really saying that, so I wasn’t really put off.

Nevertheless, I was gratified when, in the DVD documentary, Greta Gerwig recounts a conversation she had with Chalamet, after she made him read a lot of political stuff to prepare for the role:


It’s always good to raid your own life for specific details and gift them to your characters to make them come alive. Obviously, in an autobiographical coming of age story, Gerwig is going to give most of her personal details to her heroine, but she saves some for the other characters as well, even the villain—especially the villain, who is the easiest character to lose the humanity of.

I’ve talked before about how, in the opinion of actor Ronny Cox, all four men in “Deliverance” were aspects of novelist/screenwriter James Dickey. Every character needs humanity if they’re going to come alive, and there’s no better source of humanity than yourself. Thankfully, you contain multitudes. There are many people within you, so you can spread your humanity around.
Posted by Matt Bird at 12:00 PM