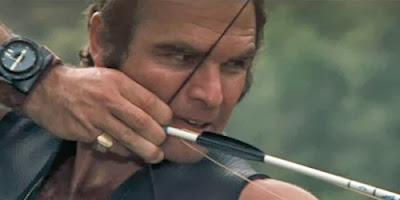 I’ve written before about how James Dickey’s book (and later screenplay) “Deliverance” was based on a real canoe trip he took with three other businessmen from Atlanta…but in real life the mountain folk who found the men just gave them a nice meal and a lift back to town. Dickey didn’t base the story on the worst thing that had happened to him, but on the worst thing that could have happened to him.

I was aware of that story because the Burt Reynolds character was based on Lewis King, a great guy who died last month, after a long, good life.

I knew Lewis because my mom was his friend and financial advisor, and now she’s helping handle his estate. While getting his papers on order, she was shocked to discover that Lewis had no insurance on any of the commercial real estate that he owned, but I reminded her that in the very first scene of Deliverance, Reynolds finds out that Ned Beatty’s character Bobby is an insurance agent, and snaps: “I’ve never had insurance and I never will…There’s no risk!”

Anyone who knew Lew and watches the movie can see that Dickey copied his friend’s persona very faithfully…but wait just a second—the fourth member of the ensemble, Drew, was played by Ronnie Cox, who had this to say:
So which is it? Is “Lew” based on the real Lew or on Dickey? We need not resolve this, because there is no contradiction. It’s always a good idea to base a character on someone you know, but that character must also be based on yourself, because that’s a well that you can peer much deeper into. Lew had the sort of larger-than-life personality that writers love to appropriate, but Dickey could not have written him well without finding part of Lew in himself.

Deliverance has the sort of four-part polarization that you see here: Head (Voigt), Heart (Cox) Stomach (Beatty) and Crotch (Reynolds): when you add them up, you get a complete human being, as Cox observed. But each character must also be a believable human being in his own right.

“Deliverance” works as both an inter-personal drama, creating a harrowing conflict between four believable characters, and an intra-personal drama, dramatizing the internal debate a person goes through when faced with a traumatic situation. To do so, Dickey combined specific details from the lives of his friends (such as Lewis never buying insurance) with the polarized aspects of his own personality.

The results are tremendously powerful: We utterly believe in the reality of this situation, and yet we also feel that the work has invaded our psyche, exposing our innermost fears and insecurities.
Posted by Matt Bird at 7:42 PM