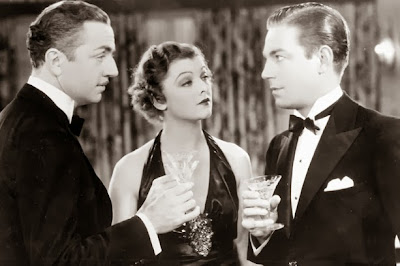 I recently had to cut ten pages out of an old script, and one thing I found myself doing seemed counterintuitive, since it meant abandoning one of the strengths of the film medium. I realized that, in order to keep things moving, I had to think more like a playwright, and replace process with revelation.

When your heroes unravel mysteries (and almost every type of story has a mystery element, even if the question is just “why doesn’t he/she like me?”), you can either show your heroes visiting a bunch of places and having a bunch of conversations and see the truth dawning on their faces, or you can allow your heroes to get ahead of the audience, confront their antagonist with a bunch of facts they gathered, then have them reveal to both their antagonist and the audience where they went, what they did, and how they figured it out.

Playwrights, for a number of reasons, must do this:
Screenwriters, on the other hand, would seem to have none of these problems:
Nevertheless, screenwriters are wise to learn this trick. This is part of every event being a character event. Yes, it can be emotionally powerful to show characters discover a piece of information, but it’s more emotionally powerful to show them confront others with that information.

So why not show both? Because If you show both the discovery of the information, and the confrontation with the information, then that’s going to feel like a repeated beat for the audience. They just want to find it out once, so they get bored if they have to see multiple characters discover the same information at different times.

Of course, in order to pull this off, you must let your character temporarily get ahead of your audience until the confrontation happens. This is a risk, because it breaks the audience’s identification with the hero, but the reward is worth it.

You’ll notice that this almost always happens with the final reveal in a drawing room murder mystery: even if we’ve been right there on the hero’s shoulder the whole time, playing along with solving the mystery, the hero collects the final clue without us there, so that we can be in suspense until the more important moment, when the hero confronts the villain (surprising us just as much as the villain, if we weren’t able to figure it out without the final clue.)

Process is great too, and I love a good montage, but sometimes you must deny yourself that ability and think like a playwright.
Posted by Matt Bird at 8:00 PM

Labels: Books vs Movies, Concept, How to Plot a Mystery, Storyteller's Rulebook, Structure