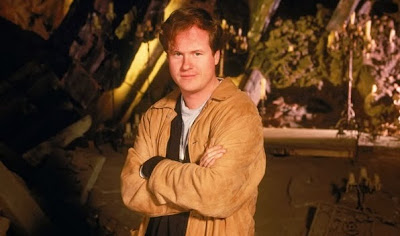 Okay, folks, here we go again. You all know and love the Ultimate Story Checklist, right? That was originally written for screenplays, then expanded to include all types of stand-alone stories. But what about TV shows (and other forms of ongoing stories)? More than ever before, would-be TV writers are required to write “spec pilots”: the first episodes for shows that will probably never exist. We’ve examined “How to Create a TV Show”, so let’s now create the first ever expansion pack for the Ultimate Checklist! (This is, of course, only Version 1, so feel free to kibitz!)

Part 5: Dialogue: Use all the same questions from the Ultimate Story Checklist

I was wondering about the character section. In points 1-3 you seem to imply that you need a large number of good regular roles already set up in the pilot. Thinking back to the original pilot of The X-Files we only really get 2 regular characters introduced (Mulder and Scully, at this point it was unclear if Cigarette Smoking Man would be a regular or not) and most of the other regular characters are introduced later in the series.

My thought is that your pilot can become swamped in introducing characters especially when you only have 45 minutes to work with. Do you think that this is one of the problems that the Agents of Shield pilot had? It did seem like too many characters too soon to me.

There have been exceptions, such as "The X-Files" (and, for that matter) my all-time favorite TV show, "Secret Agent", which only ever had one regular character!) but almost every TV ensemble these days is large. "Supernatural" is the only exception I can think of, since it started with two, but it's been expanding ever since. (I guess "Person of Interest" started with three, but it, too, has been growing.)

Yes, it's a shame to have spend so much time in your pilot setting up so many characters, but the problem is the five-year contracts. You have to be able to attract a lot of top talent right out the gate, and convince them that it's worth the commitment.

This is one reason it's good to write pilots: it forces you to learn how to do quick, great, surgical-strike character introductions.

I dunno about "almost every TV ensemble these days is large." "Louie" and "Curb Your Enthusiasm" both had similarly few recurring characters in their pilots. (Louie's pilot = only recurring character was pretty much just Louis CK, maybe the daughters, and Curb's recurring characters = just the roles played by Larry David, Cheryl Hines, and Jeff Garlin). And the pilot for "Girls" introduced only four permanent ensemble characters.

Yeah, "Louis" is pretty much a one-man show. I could make the case though that "Curb" and "Girls" both had closer to six-ish in their first seasons. (Ted Danson and Richard Lewis on one, Adam Driver and Brian Williams's daughter's boyfriend on the other)

Nevertheless, in all three cases, a writer/showrunner/star created the show as a personal vehicle, which is a special case.

Oh, I thought this was about the pilot, not the whole first season . . .

By the way, when you say "is your show set in an unsafe space," maybe that can be amended to "is your show set in a safe yet unsafe space." The bar in "Cheers," the office in "The Office," the Parks and Rec dept. in "Parks and Rec," the study room in "Community," the court in "Night Court," etc. etc. are all places where the characters might be challenged, contradicted, and insulted by other characters (unsafe space) but it is a place where they "belong" in some fundamental way (safe space).

Although the post to which you link shades out the idea of "unsafe space" in a more subtle way, I think that it's important that the space be as safe as it is unsafe. Otherwise it will be unbearable and incomprehensible; why would these people come back every day, just to be taunted/humiliated/defeated? Perhaps you should reformulate this as "an attractive unsafe space" or "an unsafe space where one nevertheless belongs" (indeed, where everyone knows your name . . . . )

I'm pretty sure all of those characters were in those pilots (except maybe Danson?)

Yes, the sitcoms you cite have safer unsafe spaces than many other shows, because most of them are about intentional communities where, as you say, there needs to be a certain comfort level in order for it to make sense (although you know you're going to get mocked regularly.)

Of course, there are many, many shows where the viewer keeps asking "why would these people come back every day, just to be taunted/humiliated/defeated?"

One thing that's implicit in a number of these questions but that might be worth stating explicitly is something like: "Can your concept hold an audience for 50-100 hours of story?"

And perhaps an addendum to that about being honest with yourself when you have a good TV idea that ought to end with just one or two seasons, but that might be severely comprimised by trying to overstay its welcome, like "Prison Break" or "Homeland."

I've said this many times before but that doesn't mean I don't mean it every time: we can't thank you enough for sharing all of this rigorous work with us anonymous Internet denizens. I never thought I could learn this much from a writing sensei, let alone one I've never met.

Thanks for the thanks, J.S. It's nice to be appreciated!

The economics of TV are changing, and the 50-100 hour rule is going away, with Americans now embracing great shows like the UK Office and Canadian Slings and Arrows planned to just last 14 and 18 episodes, respectively, but I think that you're right in that there's still got to be something that makes the audience think "there's potential for a lot of interesting stories here."

You don't have to be a studio exec to watch the pilot for "Hostages" and say, "If I commit to this show, what the hell am I committing to, exactly? What am I going to be watching four weeks from now??"