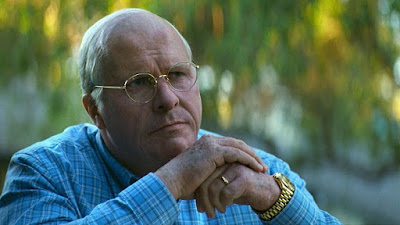 A lot of people were shocked this was nominated for Best Picture, because the reviews weren’t great, but if you look at my previous Best Of lists, you’ll see a lot of McKay, Bale, Adams and Carrell, so you can’t be too surprised to see this here, can you? I don’t know what those bad reviews were talking about because I loved it.

And there was nothing I loved more about the movie than the opening title card:


One of my problems with BlacKkKlansman is that it falls into a trap I’ve talked about before. In order to make a movie about the Klan in the ‘70s, the filmmakers just waited until someone walked in the door with a self-aggrandizing memoir. Then they had to turn an “I prank called David Duke” anecdote into a whole movie.

But movies should tell true stories that need to be told, not just tales on the periphery of history that a self-promoter wants to push. This is much harder to do, but the makers of Vice did their fucking best. Neither Dick nor Lynne Cheney were pushing McKay and company to tell this story, but enough of the facts were out there that they could get the job done.

I did a whole series many years ago on the question of who has the right to tell a story. Do you have the right to make a biopic about someone who doesn’t want their story told? For that matter, do liberals have the right to make movies about conservative protagonists? I think that one way you earn that right is to show empathy for your enemies, even the very worst of them, and this movie does that well. My heart leapt when Cheney almost-instantly told his daughter he didn’t have a problem with her being gay. That was the moment of actual heroism that McKay was able to find in Cheney’s life, and the movie would never have worked without it. That was the moment that McKay earned the right to tell this story: He found humanity within his anti-hero, and celebrated it.

Bitcoin is a digital currency that operates without any central control or supervision of banks or governments. Instead, it relies on peer-to-peer https://daneshyari.com/mag/108/everything-about-the-exchange software and cryptography; Therefore, it can be sent to a peer in a bitcoin network without the need for an intermediary from one user to another.