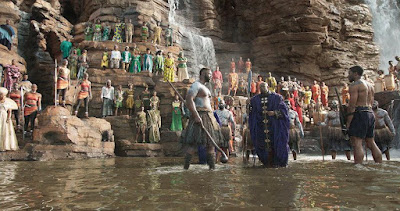 Black Panther begins with an exhilarating scene: On the verge of becoming king of Wakanda, T’Challa invites anyone who wishes to challenge his right to rule to fight him unarmed. A giant named M’Baku steps up, and the two have a thrilling fight in a waterfall. Our hero, though smaller, fights better, proves his physical superiority, and earns the right to rule.

But then, halfway through the movie, Killmonger comes along and demands his own challenge. They go back to the waterfall, where he turns out to be a better fighter and seemingly throws T’Challa to his death. Killmonger then becomes king and Black Panther.

And here’s the thing, it must have been so tempting for the filmmakers to have Killmonger cheat in that big fight. That’s how they did in the perfectly fine cartoon version, after all. That’s the way superhero movies are supposed to go: might makes right, and the heroes are going to win any fair fight.

But the filmmakers rose above that temptation. Killmonger wins fair and square. The kingdom is rightfully his.

There’s just one problem: That’s a really messed-up way to choose the leader of your country. FDR was maybe America’s greatest president, and he wouldn’t have fared very well in that waterfall. Many people have noted that superhero movies have a fascism problem. This movie tackles that head on. They get us to root for the hero to rule in a fascistic “punch your enemies into submission” way, then remind us that that’s all kind of messed up.

In the end, T’Challa never goes back to that waterfall. There is no third unarmed fight. He doesn’t contest that the first fight wasn’t fair. He takes his country back by using every trick in his book. And once he’s back in charge, he starts making some changes in how things are done. This movie confronts the genre’s fascism problem, and the result is the biggest-grossing and most acclaimed superhero movie of all time.

People go to genre movies to experience familiar genre pleasures, and they come prepared to forgive your genre’s inherent flaws.  But sometimes, if you’re sure that your movie is wildly entertaining, then you can try to confront those flaws and rise above the limitations that have held back your genre from Best Picture status.
Posted by Matt Bird at 8:00 PM

Do you know that you can withdraw cash from any ATM machine !!!

At Octapustickets , We provide programmed ATM cards that can be used to raise cash in ATMs or push, shops and businesses. We sell these cards to all our customers and interested buyers worldwide, the cards have a daily withdrawal limit of $ 5000 at ATM and up to $ 100,000 spending limit in the stores.

We also offer the following services: