Best of 2018, #1: The Favourite (And How Audiences Pick Their Favorites) 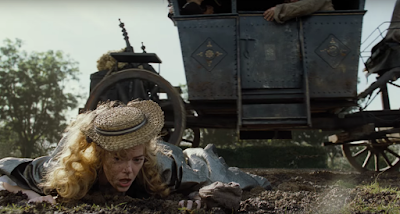 This year, The Favourite was my favorite (and wouldn’t it be nice if the Oscars picked it, just so that the headlines could write themselves?)

We’ve talked about the Villain Fake-Out before, where a supporting character turns out to have been the villain all along, but this movie does something more ambitious: Our hero gradually turns villainous, and her victimizer gradually grows more sympathetic.

The movie does all the work of making us fall in love with Emma Stone (First step: Cast Emma Stone), and we only belatedly say 90 minutes later, “Hey, why did I ever fall in love with this lady? She’s kind of terrible.” So we look back at what gave us the false impression that she would be a better lover for the queen than Rachel Weisz. We see the tricks they used:


Wouldn’t it be nice if our poor, put-upon heroine could live out a Cinderella story, win the heart (and bed) of a royal and get to spend the rest of her life attending balls in the palace?

But it’s only when Stone is the new Favourite that we remember, “Oh right, bad people can be poor and humiliated, too.” And they can even be “nice”, when it advances their cause. As Weisz tries to remind the queen after she’s been forced out, a good lover should tell you when you look like a badger. Stone sees that the queen no longer wants honesty, and there’s a chance to steal her away with fawning lies.

We believe in all the characters, because the details in the movie are wonderful, but we care for and invest our hopes in Stone’s character only. Then we discover that her eventual success does not gratify our emotional investment like we thought it would. By design, we do not care for nor invest in Weisz’s character …until the end, when we re-evaluate our value system. The movie encourages us to question the ways that all movies get us to choose our favorite character, and realize that just because one character is clearly easier to care for and invest in, doesn’t mean that the easy choice is the right choice.
Posted by Matt Bird at 8:00 PM

This is a great choice for no.1, I still slightly prefer Roma for its visual power and the soundscapes throughout. I hope the Favourite gets at least Best Original Screenplay though.
One thing I really loved was how unrefined and dangerous they made the period feel like. I don't know how accurate it was but it felt like a world where getting your head chopped off was only a few mistakes away, and everyone was in it for themselves. I really liked the scene early on where Stone gets burned by the floor cleaner, that felt like even these everyday mundane tasks are ones with which you need to tread carefully.