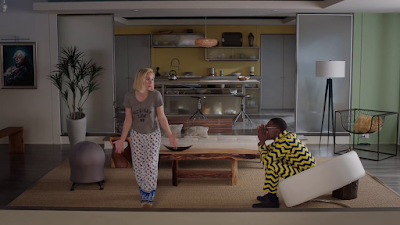 35 years separate the earliest and latest sitcom we’ve looked at, “Cheers” and “The Good Place”. Both are NBC Thursday night sitcoms featuring Ted Danson, but a lot has changed in that time.


The result is that a half hour now has as many commercial breaks (4) as an hour used to have, and when you write a half-hour spec pilot intended for network, you’re supposed to indicate those four act breaks in your script (and a fifth act break at the end, of course).

(Of course, you might say, “That’s super-annoying, I’m not going to do that, I’ll just say that my sitcom is for Netflix or HBO and include no commercial breaks, but if you do, know that the person reading your script will expect it to meet the content expectations of those networks. If it’s obviously a tradition sitcom without breaks, they’ll call foul.)

I don’t have a copy of the “Good Place” pilot taped off TV, but let’s look at where the act breaks seem to have been:


A commercial would traditionally go here, but I wonder if it really did. One tricky thing about this pilot is that the twist is such of big part of it, both because it makes the show a lot more interesting, and because the main character seems sort of bland before we find out she’s an imposter. I wouldn’t be surprised if, on first airing, they skipped this break. But still, if you were writing the pilot, this would count as a break, and it’s just interesting enough to provide one.


This is the closest thing to a midpoint break, but storywise it’s more like a late ¼ point break, in that this is where the concept is really established, the plot begins, and the character becomes interesting. This is a great twist and a great break.


This is close to the ¾ point, but it’s more like a late midpoint break. Having Eleanor try to fit into this world is officially a disaster, so the easy way (bluffing it) won’t work.


At this point, the acts are getting very short, which is typical of modern shows. They cram most of the ads into the second half. This one provides a literal spiritual crisis, so it’s a good final ad break.


Ideally, the plot engine (what the hero will do every week) would be established at the midpoint at the latest, but in this case, as we’ve discussed, it’s not until the final moment, or presumably just after the final moment, when Chidi agrees to tutor her.

So that’s how to do network ad breaks these days. Each one has to be interesting enough to keep us from changing channels, which is hard to do four times, but these qualify. Schur had a dozen seasons of network TV under his belt at this point and he was an old master at the ad break business.
Posted by Matt Bird at 8:00 PM

The result is that a half hour now has as many commercial breaks (4) as an hour used to have, and when you write a half-hour spec pilot intended for network, you’re supposed to indicate those four act breaks in your script (and a fifth act break at the end, of course).
Read more at thiet ke noi that go oc cho