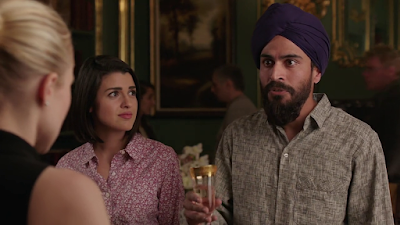 I’ve said before that straight drama shows us what life is like, but genre shows us what it feels like. Our high school life wasn’t really like “Buffy”, but that’s how it felt, with the world ending every week. “The Good Place” is too weird to have any one genre, but it’s clearly an unrealistic fantasy show, and it very much captures what life feels like.

Specifically, the show captures what it’s like to be on Facebook, where everybody else seems like a perfect person and you feel like a loser-creep compared to them. There’s a hilarious montage in the pilot of everybody talking about how ludicrously angelic they were back on Earth (“Well then he said, ‘you can’t give me both your kidneys, you’ll die’, and I said ‘But you will live. And I know we just met on this bus ten minutes ago, but you seem nice’”). We can’t help but be on Eleanor’s side, because we’ve all felt like her and we have no idea what it’s like to feel like them. I ask again, when was the last time you saved a cat?

I’ve also talked about how every hero should have a public identity that contrasts with their private self, and Eleanor is the ultimate example of that. We begin with Michael summing up her wonderful selfless accomplishments, but only she knows that this was another Eleanor, and she’s actually a terrible person, and there’s been a terrible mix-up. We’ve all felt that way: It’s imposter syndrome, times ten. I’ll go back to that quote from Dylan I’ve used before: “If my thought-dreams could be seen, they’d probably put my head in a guillotine.” That’s literally the dilemma she faces.

“Parks and Recreation” was one of the most realistic sitcoms ever, reveling in the mundanity of empty bureaucratic lives in a nowhere town. Schur was shocking us in a different way: Can you believe that a show can be this mundane and low-stakes? “The Good Place” couldn’t be more different, in setting, genre, and tone, but both shows show us lives we can fully identify with, in very different ways: one because of its everyday realism, one because of its fantastical exploration of how life feels, writ on a wild, supernatural canvas.
Posted by Matt Bird at 8:00 PM