Straying from the Party Line: The Pros and Cons of the Very High Concept 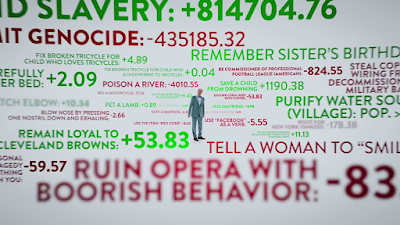 When you’re just starting out, it’s hard to get noticed, but one way to do it is with a very-high-concept pilot. I’ve said before that it’s good if there’s something bold, weird, and/or never-before-seen about the concept of your spec pilot. “The Good Place” qualifies in spades.

(Of course, the rules are different when you’re trying to get noticed vs. when you’re actually trying to get something on the air. A script like “The Good Place” is actually a very hard sell to a network, and NBC seems to have only reluctantly aired it, because Schur had made them a lot of money and because the script attracted Bell and Danson.)

But this script also shows how hard it is to write a very-high-concept pilot that satisfies traditional audience expectations. Let’s look at some of the checklist items it didn’t check:
It simply takes a long time to establish this never-seen-before setting. We spend the entire teaser and first act just learning the rules before we find out anything about our hero. There’s even an orientation video that we and Eleanor have to stop and watch to help us understand. Normally, power points are a bad sign, especially if we don’t care about the hero yet, but in this case, the show gets away with it, because the world is so interesting (and Danson is so appealing).

The downside of this long set-up is that it takes a long time to meet our hero and the real plot driver for the series is not established until the final minutes, leaving no time for a foreshortened example of a typical plot, which viewers crave before they commit to the show. We don’t get to see Chidi helping her yet.

But this show was not a big hit on first airing. It was only when it appeared on Netflix and people could binge the first season that it caught on, to the extent that it has. This wasn’t made by Netflix, it’s still sort of a “Netflix show”, paced more for a binge than for watching week to week, and I think that’s becoming more of the norm, so maybe you can get away with it more now. Or at least Schur can. For a spec premise pilot by an unknown writer, you’d probably still want to have a foreshortened plot taking up the second half, to show that the show will work, which means that your pilot maybe can’t be this super-high-concept.

Don’t get me wrong: In this case, the big risk pays off beautifully.  Your jaw is on the floor the whole time in a delighted way.  As the above still shows, the rules are actually fun to figure out, and the break from sitcom routine is very refreshing.  Schur’s other sitcom on the air now, “Brooklyn 9-9” has what could be called an overly-familiar TV setting, which is a limitation that show must overcome.  This show, to put it mildly, doesn’t have that issue.  Yes, it doesn’t meet all of our expectations, but it teaches us to rewrite our expectations, and once we realize how appealing it is, we’re more than willing to do that.

Labels: Straying From the Party Line, The Good Place, TV