So I watched the pilot for “Agents of S.H.I.E.L.D.”, which was so-so. There were various problematic things about it, but nothing moreso than this: 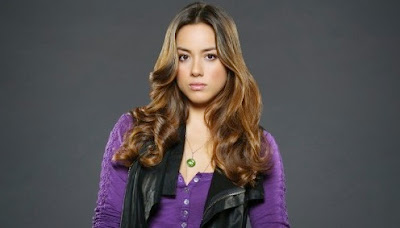 That hair! I am so sick of that damn hairstyle! To a certain extent it’s always been the case that every actress on TV has the same hairstyle, and I understand that hairstyle fashions come and go, but what makes this style so bad is that it’s particularly unrealistic, and it’s been the universal default actress haircut for almost ten years.

Now please understand, I’m a manly-man catch-bullets-in-my-teeth tough guy, so I’m not supposed to know or care about hairstyles, and I don’t, I promise… That’s why it took me years to notice how omnipresent this damn thing was, and why it bothered me so much.

I first noticed it in the ads for “Rizolli and Isles”. The whole point of this show is that these women have nothing in common. One is tough, butch and no-nonsense, while the other one is feminine, fancy, and stylish. But just look at the damn ads: 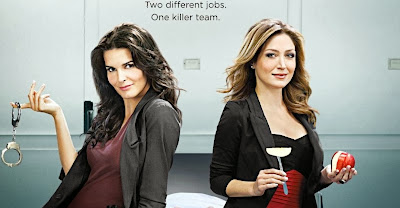 They’re clones! The “tough” one has the exact same super-girly hairstyle as the girly one! The problem is that no woman who isn’t paid to be pretty has ever woken up in the morning and given herself this hairstyle. It takes about half an hour. Stylists pride themselves on this hairstyle because it’s hard to create.

In real life, if you’ve got really long hair, you have limited options for keeping it out of your face: bangs, barrettes, ponytails, or product. Women with serious jobs only have time for the first three, but every career woman on TV or in movies somehow has time for the fourth. Here’s another example of two women who are supposed to be very different, and in this case they’re both supposed to be super tough: the remake of Total Recall... 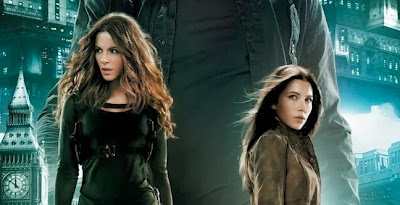 But “Agents of S.H.I.E.L.D.” is a new low, because in this version, the character is a radical revolutionary who specifically explains in her very first scene that she lives in her van. This is not just a throwaway line. We see the van. There’s no shower. And she goes on constant rants against the government and conformity! And she’s got that goddamn hairstyle!  I can’t take it anymore!  I can’t take it!

That is all. I just had to get that out of my system.  Back to real content tomorrow.
Posted by Matt Bird at 12:34 PM

HAHAH! TRUE! That hairstyle! We need Jo from The Facts of Life with her ratty ponytail to come and remind us of the difference in tough girl vs. pretty girl - these women are all rocking Blair hair. Not good.

Yeah, but it's not just their hair. All of those images are of the type of bland looking white woman that's a dime a dozen in the aspiring actress talent pool. Where are the future female stars with a little more color in their faces and personalities and a little more idiosyncrasy in their looks? Furthermore, you see a lot of these same types in low-budget horror films, where their presence is even more ludicrous than your vehicularly housed example, given the setting/action in which we're supposed to imagine they'd survive even a few minutes of anything more harrowing than breaking a nail.

Btw, this reminds me a bit of our hat debate in your DONNIE BRASCO thread. It's these ineffable intangibles that are sometimes the most revealing of a creative vision.

I enjoyed your rant and I a women hadn't really noticed. You are right it does take work to get your hair and make up that perfect. I guess we are to be charmed by their beauty not to notice. I have long hair and that look would last about 10 minutes on me. It is really nice to see that a real man gets it and thank you. I now can be my real woman self a little messy but perfect just the way I am.

Too true. Made me laff.

Lol. Yes, this hair is everywhere, including on the street. Perhaps there's an opportunity to do some sort of spoof spy or cop show where all the women have long frizzy hair. Because you're totally right. Unless you can devote an hour to doing your hair in the morning to make it look that good, you're going to pull it back or just go frizzy that day.

Btw, I saw your wife's children's book in my bookstore the other day! Congrats. I'll get it for my niece for Christmas.

Not to mention, in the Rizzoli & Isles example, why is a police officer running around with all that hair in her face? Why is a medical examiner letting her hair flap all over and risking getting one of her hair follicles onto the dead body she's examining? Ah, but it's not meant to be truly realistic.

Compare and contrast with Orphan Black, where they use radically different haircuts to help differentiate between the different clones...

So a woman can't be tough and pretty? Seems to be the point of this. How dare pretty women be tough! They're not good enough for my preconceived misogynist ideas because I'm a catch bullets in my teeth manly man and therefore authority on how women are allowed to look if they want to be tough.

Bitch, please. If you'd stuck with the "this hairstyle is unrealistic because SHE LIVES IN HER VAN", well, I was saying the same thing while watching the show ("how does her hair look so clean and obviously styled if she lives in a van? Is she stealing curling irons at the local YMCA shower room?"), but then you had to make it about how women aren't allowed to look a certain way and still be tough.

But why do you assume that practical hair isn't pretty? Bangs, barrettes and ponytails, not to mention short hair, can all be extremely attractive. I think that, for most guys, simple is a lot more attractive than fussy.

no idea where you get the idea that to have long hair, you have to spend every morning with your stylist.
The first picture looks like it might take some work, but the third looks like it could totally be done with ten minutes and a comb.