Silence of the Lambs week continues! 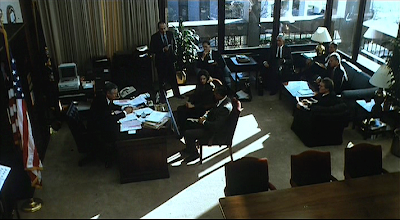 The two-disk DVD of Silence of the Lambs features an amazing collection of special features—it’s basically a film school in a box.

It includes not only deleted scenes, but every line deleted from the remaining scenes, which is highly instructive when it comes to trimming screenplays down and keeping things moving.  The editor is constantly snipping off the ending lines that would have provided a little “button” for each scene…But of course life is a lot more unpredictable and dangerous when things get unbuttoned.

The finished movie is exactly two hours, which was obviously the producer-mandated length.  If Demme hadn’t gone through and ruthlessly cut out every slack line and scene, it would have been 2:20, the standard length for today’s flabby, lifeless blockbusters—strong evidence that the tyranny of the “director’s cut” has ruined Hollywood’s ability to tell stories.

Especially instructive are the two cut scenes that were obviously intended to provide a “launch into act three”.  After Lecter escapes, the angry director of the FBI (played by Demme’s old mentor, Roger Corman) calls our heroes into his office where he summarily fires Crawford and kicks Clarice out of the Academy.  As they leave, Clarice says to Crawford that she’s now sure that the killer must be in Ohio, and she’s going to go there and find him, save the day, and get them their jobs back. 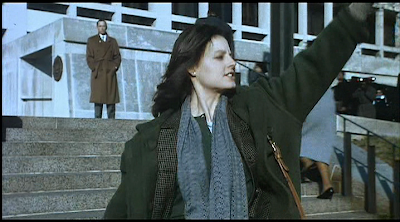 These scenes were still in the movie for the early test screenings, but William Goldman (Butch Cassidy, Princess Bride, Misery) attended one of those screenings and implored Demme to cut them.  Luckily, Demme knew that he should take the advice of his fans: he chopped them out and never looked back.

Yes, it was vitally important to shift into proactivity and create a finale in which Clarice was the only one who could solve the problem, but she shouldn’t have to announce it!  The audience should feel the structure, not see it.

Tomorrow: How to empower a less-than-cocky rookie.
Posted by Matt Bird at 8:00 PM

I don't think those beats that Goldman wanted out are in the novel, which is really a quick read and totally worth reading now that you've done so much work on this story if you haven't read it yet.

The two things that impress me most about the book are: 1) How much of what's great about the film is almost exactly the same in the book -- so many major things to do with characters, dialogue, action, but minor touches too that seem uniquely cinematic, like the cross-cutting misdirection about houses with the SWAT raid near the end; 2) How hard it was to write. This is Harris' best work and it seems so effortless while you are reading it, but make no mistake, every word was difficult for him. He pretty much hates the actual process of writing and says it's like pulling teeth for him and he feels totally lost and that so much of what he does is complete sh*t, etc. -- much like it is for the rest of us mortals. It's just refreshing to hear that about the origins of a story that so perfectly hues to your ultimate checklist.