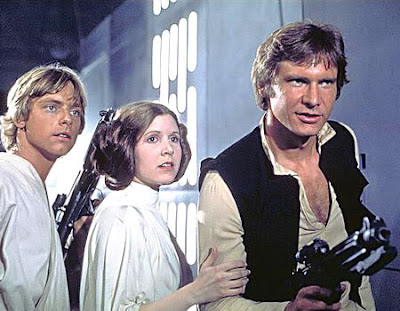 So I spent all this time asking whether Luke really had to change or merely accept himself, (and if it’s the latter, then what does that do to the Hero’s Journey?), but all this time I’ve been ignoring the fact that Luke is hardly the only portrait of heroism we get in Star Wars. What about Han? There’s a guy who really needs to change. What can we learn about alternate versions of heroism by looking at his arc?

Think of the end of the movie. Luke ends up attacking the empire, which is exactly what he wanted in the beginning, though he never thought he would get there. Even when he’s there, he thinks he has to succeed by being like the others, until Obi Wan tells him he can only succeed by using his unique, inner strength. Han, meanwhile, also shows up at the end to attack the Death Star, but this is the last place he wanted to end up when we met him. He still refuses to do it until the last minute, and with good reason. He’s just gotten paid off and he needs to go get a bounty off his head, but suddenly that goal pales in comparison to the new, unfamiliar feelings of heroism that seize him. As we’ll see in the next movie, he has indeed lost his last chance to pay Jabba back, but in this movie it’s worth it, because he now values his friends more than his own skin.

When we meet him, Luke is a great person who thinks, incorrectly, that he’s a failure (because he didn’t go off to join the rebellion with his friends). Instead, he discovers, ironically, that the rebellion needs his farm skills (shooting at womprats) more than any skills he would have learned at pilot school. Han is the opposite. Han starts off as a failure who thinks, incorrectly, that he’s a great person. He needs to develop self-doubts so that he can become a hero by doing the opposite of his instincts. Both journeys make for strong stories. Overlaying the two journeys on top of each other was genius.

Or can the two separate ideas exist within the same journey? In my original post about change and individuation arcs, there was a blatant discrepancy between the two structures, though I ignored it at the time. (Can you spot it?) Suddenly, this discrepancy is resolving itself… A new unified structure is dawning in my mind… Come back tomorrow!