The Expanded Ultimate Story Checklist: Is the hero surrounded by people who sorely lack her most valuable quality? 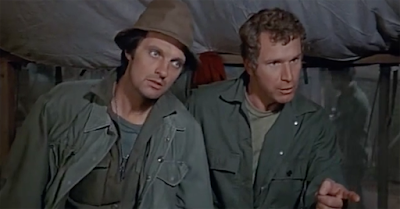 Many of the misconceptions mentioned earlier in this chapter can be summed up with the false notion that a hero is a character who would be heroic in any situation. The truth is, most heroes only become “heroic” as a result of a unique situation and might seem downright monstrous in any other.
This is another problem with cat saving: It’s generic, not specific. A hero who is likable in one situation might be entirely unlikable if placed in a different story. Every crisis situation has something lacking, a vacuum that’s just begging for a certain personality type to come in and fill it. Sometimes the situation calls out for a hero who will speak truth to power, but other times, it just needs someone to come in and start a keg party. The writer must find the right vacuum for every hero and the right hero for every vacuum.

In the book, movie, and TV show M*A*S*H, we’re happy to have a martini-swilling, ultracynical hero like Hawkeye Pierce dropped into an uptight military base, where he can puncture all the gasbags and bring a breath of fresh air. In contrast, nobody is rooting for the Grinch to bring his cynicism to Whoville. Hawkeye is a hero because he’s just the right interloper to fill the vacuum he finds himself in. The Grinch is a villain because he’s the wrong interloper at the wrong time.

Heroes can’t be generically heroic. Writers are always trying to search for a universally applicable key to heroism. After all, when we seek ways to make our heroes more likable, we secretly hope we’re also gaining life skills for ourselves. Perhaps once we’ve discovered what makes Jimmy Stewart so likable, we can become just as appealing in our own lives!

But the truth isn’t as encouraging. It turns out the secret to creating a hero is often to simply make everybody around the hero look awful. As Rodney Dangerfield says in Back to School: “You want to look thin? Hang around fat people!” That’s not a solution writers will want to transfer to their real lives.

This seems, on first blush, like a very cynical and manipulative way to write. You’re tricking your audience into liking your heroes simply by placing them into an extreme world. You’re not playing fair. You’re stacking the deck!

But this actually makes good sense. In fiction, as in life, nobody gets any credit for doing what everybody else is doing. Most stories aren’t about morals, which are universal; they’re about ethics, and ethics are entirely relative. In the same way that actions are only heroic if they’re hard to do, personality traits are only admirable if you have to go against the grain to act that way.
Posted by Matt Bird at 12:38 PM

Your blog contains a lot of useful information. Please accept my thanks. But still, I would recommend that you read the article apa photo citation here . For any images that are not your own work, place a caption below the image and include the full citation in your bibliography.

The best slots of 2021 - DrMCD
From the 남양주 출장안마 stylish 경상남도 출장샵 Evercade to the top casinos and exclusive slots games to 전라북도 출장안마 new slot bonuses, the 목포 출장안마 Best Slots Of 2021 will give you the 포항 출장안마 go-ahead to