The Expanded Ultimate Story Checklist: Is the hero already doing something active when we first meet him or her? 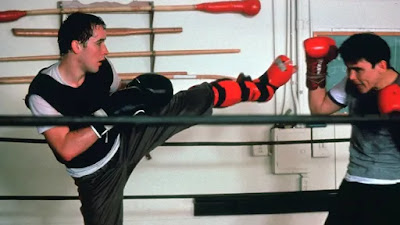 The audience must know that this hero is the sort of person who actively pursues things. Heroes are often literally active in the first scene: jogging, swimming, bicycling, playing tennis, etc. Assure your audience as quickly as possible that the character is going to be active, both literally and figuratively.
Sometimes the hero will begin by doing something cool or admirable, but it can also work well to have a character pursuing something active that makes him look bad. Amiable goof Lloyd Dobler in Say Anything wants to be a kickboxing champion until he unexpectedly gets a date with the girl of his dreams and changes all of his goals. Even though his kickboxing spiel sounds very loserish, it’s actually far more appealing than if he simply said, “Eh, I don’t know what I want to do yet.” We like him because he wants something, even if we think what he wants is dumb.

You might assume the audience will more easily root for a smart hero who can see all the angles and who would therefore rather do nothing than act rashly, but they actually hate heroes like that. Nobody wants to watch somebody do nothing. The audience wants to be reassured right away that heroes aren’t passive sticks-in-the-mud. Many weak heroes never take the initiative. Nothing is ever their idea, good or bad.

In a lot of stories, and especially in comedies, you have heroes who are plunged into over-the-top situations where everybody wants them to do something wild and stupid. Stupid isn’t sympathetic, right? So you show how smart your hero is by having him tell everybody else that they should be sensible, right? Nope.

For instance, Ted Mosby is the titular hero of How I Met Your Mother, but he’s by far the least likable character because he’s a scold, and audiences get irritated with scolds. We like heroes who dive in enthusiastically and then make plans on the fly.

Defiance is usually good, but one problem with Ted is that he says no to his friends’ schemes even though he has nothing more interesting to propose. He doesn’t want to play laser tag with Barney, but he wants to sit around his apartment? Playing laser tag certainly is a dumb way for grown men to spend an evening, but it’s better than nothing, so we’re always going to be on Barney’s side. The writers failed to give Ted his own alternate set of enthusiasms.
Posted by Matt Bird at 10:30 AM