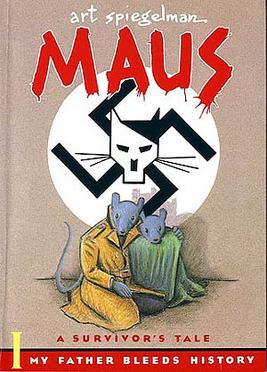 Neither Art nor his father are very easy to identify with. Art is an unsuccessful underground comic book creator, which isn’t any reader’s favorite profession. He hasn’t visited his father in two years, until he decides to come pump him for comic book material. He smokes constantly and gets annoyed when they get annoyed that he’s ashing on their stuff. Vladek is not a great dad in the 1958 sequence, unkind to his new wife in the modern day framing sequence, and a bit caddish and mercenary is his flashbacks. So the book has some hurdles to overcome with BCI.

Let’s do Art and Vladek separately. Here are some reasons we believe in Art:
There are lots of reasons to care about Art.
As for Investing in Art, the quality of the comic itself is the ultimate testament to his skills. His goal of commemorating the holocaust is noble, and he does push to get it against resistance. Neither Art nor Vladek can suspect that this comic will make Art one of the first comics artists ever to become rich and famous. His stepmother correctly points out, “It’s an important book. People who don’t usually read such stories will be interested.”

Okay, let’s look at why we Believe in Vladek:
And of course, there are many reasons to care, even before we get to his time in the concentration camps:
So why do we Invest in Vladek?
Speigelman is acutely aware of the ironies of this story. He overcomes the urge to present his late, longsuffering father as saintly, and instead presents him flaws and all. He worries aloud to his stepmother that unflattering aspects of his portrait will seem to some to confirm some of the racist caricatures that triggered the holocaust in the first place. But ultimately, he has to trust himself. The more three-dimensional the story is, the more powerful it will be, and the more it will impact every reader.
Posted by Matt Bird at 10:30 AM