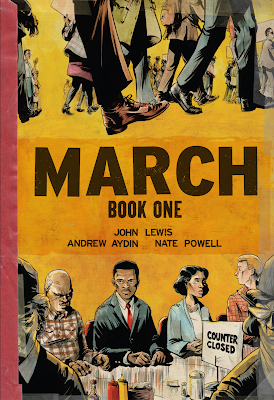 Obviously John Lewis is one of the great American heroes of the 20th century, so we certainly admire him right away. You might think that his monumental edifice might make him hard to identify with (as MLK is in stories about him), but Lewis is delightfully humble and human here, allowing us to Believe, Care and Invest right away.

Here are some reasons we believe:
As far as getting us to Care, this book does the classic trick of beginning with the most brutal moment in Lewis’s life, getting beaten on the bridge in 1965, then we jump forward to the framing sequence where he’s a comfortable congressman on a happy day for the country, then we jump back further to his hardscrabble childhood, having established both the highs and lows he’s heading toward. We fully care at this point. Let’s look at other reasons we care:
Obviously, Lewis is easy to Invest in. He’s tremendously badass.
In seminary, Lewis tells of coming across the story of MLK told in comic book format, and what a powerful tool that was. He published his memoirs in prose form (as “Walking With the Wind”, which is also well worth reading), but then he chose to reach out to another audience with this comics version, and the result is a stunning success.
Posted by Matt Bird at 10:30 AM