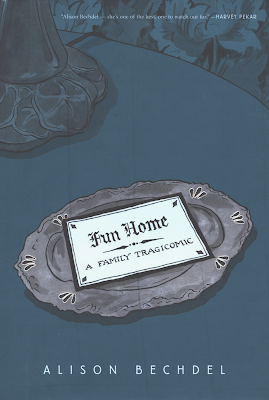 Bechdel is a passive hero. Her central action in the story is getting a phone call telling her that her father has died. She will find out some of her dad’s secrets before his death, and some after, but she mostly learns them because her mom drops them unexpectedly, not because she’s actively pursuing the mystery. This book’s primary value is that it’s thoughtful. She has, in retrospect, given a lot of thought to her relationship with her dad and now she’s got 242 pages of fascinating insights. That’s not an easy sell, but the book turns out to be easy to love simply because it’s so well written (and drawn, but the art’s not the main focus).

So Bechdel had a lot of work to do with BCI. She had to get us to connect with a passive heroine on an inner quest that doesn’t build to any catharsis in real time. How did she do it?

There is no shortage of reasons to believe in this character and this world. Bechdel has the ideal material of every memoirist: She kept extensive diaries as a girl and still has them. That means she has hundreds of details ready at hand. The diaries themselves are fascinating: She became increasingly unsure of herself and started to add a qualifying “I think” in tiny letters after every sentence. Eventually she just creates a shorthand symbol to express this, and soon she’s just scrawling the symbol on top of every word.

Some other ways she gets us to believe:
Obviously, the main reason to jump ahead and reveal her father’s death early on is that it makes it easier to care about her right away. If she had waited to wallop us with it later, we might not have gotten as involved with the narrative. Other ways she gets us to care:
We never fully Invest in Bechdel to solve the book’s mysteries. In the end, she gives it all a lot of thought, and reaches some fascinating conclusions, but she has no big breakthroughs or catharsis. It’s a gentle, melancholy book. Nevertheless, here are some reasons we invest:
Ultimately, Bechdel forges a universal story out of observations that are very specific to her odd circumstances. It’s the ultimate testament to this story’s fundamentals that it was able to be translated into a hit Broadway musical, despite having none of the elements one generally associates with musicals.
Posted by Matt Bird at 10:30 AM