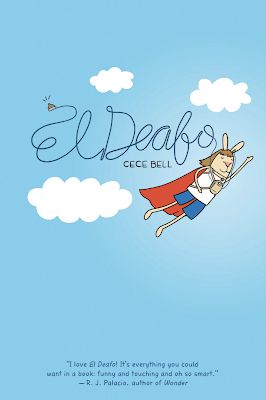 Hey guys, we’ve been talking about comics on the new podcast, but we’ve never really done any story analysis on comics on this blog! So let’s go ahead and do Comics Memoir Week! Let’s start with one of the best, El Deafo.
Why Cece might be hard to identify with: It’s a little hard to identify with a four year old, since most of us have lost all of our memories of that age. It’s pretty odd that it seems to take her days or maybe even weeks to figure out she’s gone deaf—I believe it, because this is obviously a very honest memoir, but it just makes me think, “how could a four year old not notice that? They’re so weird!”

So I think that this book may have the best one two punch of believe and care that I’ve seen. Here’s the first page: 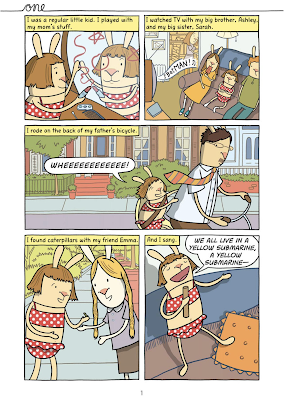 So right away we’ve got six reasons to believe:
So boom: We totally believe in this four year old hero in one page. Then what happens on page 2? 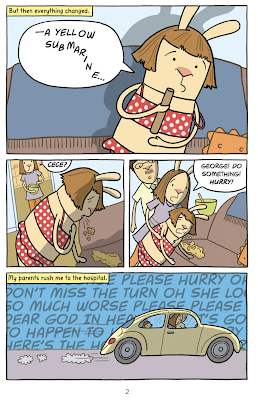 She almost dies! This specific song we all love is interrupted and she’s rushed to the hospital. Because we totally believed on the first page, we now totally care on the second page! (And superimposing the car on top of her mother’s words makes effective use of the medium.)

At the hospital, she’s taken from her parents and has a needle put in her back. We hear (but she doesn’t) the doctor tell her parents: “The fluid from her spine tells us she has Meningitis. Her brain might swell--” Her mom replies, “But she’s only four!” Cece wakes up in pain. She notices that the other girl in her room got ice cream and she didn’t (and only much later figures out she didn’t hear when they offered it to her.) When she tries to get up, she can’t stand or walk.

Of course, she’s only four and quickly becomes very helpless, so we don’t invest right away, but we finally get the chance to invest starting on page 22, when she gets a hearing-aid and starts to realize that this makes her kind of a kick-ass bionic woman. Then she goes to school and gets a super-hearing-aid. At first, she feels self-conscious about it, and enters a “bubble of loneliness”, but then she realizes that she can hear so much more than the other kids. She can hear her teacher going to the bathroom, and gossiping about the kids in the teacher’s lounge (“That Jimmy Malone is making my life HELL!”) She thinks, “I have amazing abilities unknown to anyone! Just like Bruce Wayne uses all that crazy technology to turn himself into Batman on TV”. Once she lets her secret be known, she becomes a hero to the other kids. She now sees herself as a superheroine called “El Deafo”. The bubble pops (though it will return intermittently as we move through several years of story.)

Strength / Flaw: Resilient / Self-conscious
Posted by Matt Bird at 11:06 AM

As far as I know, I am the only one who has noticed the gigantic mistake in this (great) book. I revealed it at a 90-Second Newbery screening to a shocked audience. Can you see it? It's on page 107.

Also, I think that the swimsuit detail certainly makes us Believe, but doesn't necessarily Invest as you say.

Saying invest there was a typo, I've fixed it. On page 107, are you talking about the girl in the purple shirt not having ears in one panel?

Yes -- and then the girl with the purple shirt has ears again on the same page, and in subsequent pages! WHAT IS CECE BELL TRYING TO TELL US??!?!