Not on the Best of 2020 List: The Trial of the Chicago Seven 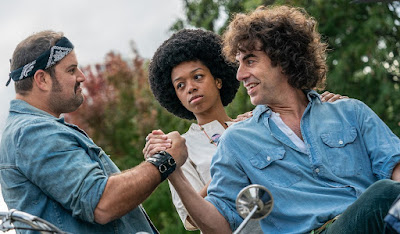 This movie was a lot better than I thought it was going to be. I’ve never been a fan of Sorkin’s, and I could imagine how this material could bring out his worst, but I tried it anyway and found it surprisingly watchable. Basically, it’s just great material. It’s such a fascinating trial that it’s easy to get sucked in.
But it’s certainly not a great movie. Sorkin is trying to be Spielberg, but he’s aping Spielberg’s worst instincts. The scene where Dave Dellinger hits a guard and the camera cuts to his son in the courtroom with a big-eyed “Daddy, why?” expression on his face is pure cheese.

And Sorkin, always a fan of power structures, can’t resist making the prosecutor a much better person than he was. In real life, Bobby Seale was shackled and gagged (nearly to death) for three days, whereas in this movie the prosecutor objects and stops it immediately.

Of course, the big problem with this movie was how miscast everybody was. Sacha Baron Cohen gives a great performance, but he doesn’t exactly look like a member of the Youth International Party. This article does a good job summing up the problem.

As the article makes clear, this was even more of a problem in the other movie where Fred Hampton gets killed.  Judas and the Black Messiah is a good movie and you should watch it, but if you watch the documentary The Murder of Fred Hampton, you’ll see Hampton was just a kid, and I don’t think Kaluuya was ever going to be able to capture that.
Posted by Matt Bird at 10:58 AM