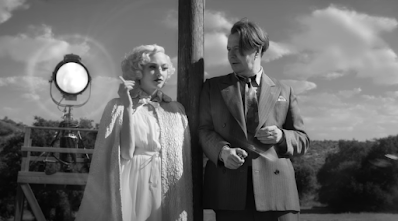 Hello everyone! Welcome to a very belated Best of 2020 series. I usually run these in the two weeks leading up to the Oscars, but the Oscars are greatly delayed this year, so I figured I should go ahead and get around to it. As always, I’ll begin with a list of the some of the movies I didn’t see, in this case: All of the Small Axe films, Promising Young Woman, and Da Five Bloods.
Now, as always, let’s look at some movies that didn’t make the list, starting with Mank.

My first problem was that I watched the movie and had a very hard time making out the dialogue. Afterwards, I was sitting around feeling bad for being so old, then I thought, “Wait, did Fincher fuck with the sound? I’ll bet Fincher fucked with the sound.” So I googled “Mank Sound”. Sure enough, I was right. The primary role of a sound engineer is to make something clear to us poor bastards with fading senses, not to create the impression that we’re in Martin Scorsese’s basement! Don’t fuck with the sound! What an asshole.

Of course, the big problem with this movie is that it’s based on a fundamental misunderstanding of how screenwriting works. In reality, Welles and Mankiewicz broke down Citizen Kane together (which the movie just skips over), then each went off to write their own drafts, then Welles combined the two drafts, favoring his own. The movie acts like it’s never heard of the idea of a shared screenplay credit where the writers didn’t work together in the same room.

I can certainly understand why Mankiewicz would want to take solo credit in later years, and could justify it to himself by saying “Well, I wrote my draft by myself,” but that’s not the way credit works.

Of course the ultimate test is what Welles went on to do and what Mankiewicz went on to do. Mankiewicz is remembered these days solely for Citizen Kane, whereas Welles turned out masterpiece after masterpiece. (Mankiewicz’s Dinner at Eight is great, but it’s very faithfully adapted from the play.)

Of course, there’s another problem. In real life, Mankiewicz and Marion Davies were basically the same age, but one is played by Gary Old-man and the other is played by Amanda Seyfried. Tomorrow’s movie will have big age problems too…
Posted by Matt Bird at 2:00 AM