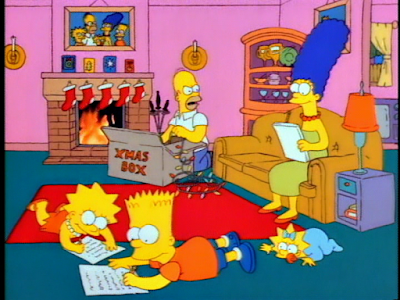 How insatiable am I for these things? I’ve started looking at some pilots where the hero is not clear and doing BCI for multiple heroes. We’ll start looking at a few of those today…
In the “Simpsons” pilot, Homer and Marge Simpson attend a Christmas pageant where their daughter Lisa does a torch dance and their son Bart gets in trouble for singing “Jingle Bells Batman Smells”. At home the kids present their Christmas lists and Homer hangs lights outside. They’ve saved up money for Christmas, but Bart gets a tattoo and they have to spend all the money removing it. Homer is told at work he won’t get a bonus this year, so he takes work as a mall Santa to afford Christmas. He gets paid only $13 and takes it to the track.

Why Homer might be hard to identify with: He has no patience for his kids’ Christmas pageant. He’s interviewing to be a mall Santa and they ask if he likes children: “What do you mean? All the time? Even when they’re nuts?” Takes his kids’ Christmas money to the dog track.

Why Bart might be hard to identify with: Not much reason. He’s pretty awesome.

Believe
Care
Invest
Strength / Flaw: Rebellious / Lawless
Why Lisa might be hard to identify with: She’s a goody two shoes