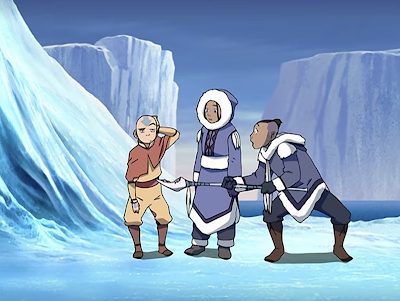 Katara narrates a long montage of the history of the Avatar and the war. Sokka and Katara are fishing when icebergs smash their boat. Katara gets mad and her water-bending powers split open an iceberg. A magical boy is frozen inside. They realize he has air-bending powers but don’t realize yet he’s the avatar, capable of all four types of bending. They take him back to their village, where he goes penguin-sledding with Katara and avoids talking about his past. Then the fire nation attacks their village.
Why Aang might be hard to identify with: He’s a little careless: He doesn’t care that his flying bison covered Sokka in snot. He’s kind of a screw-up: He gets his tongue stuck to his flying stick.

Why Katara might be hard to identify with: She’s less goofy and more serious than the boys, so she’s the least fun character.


Why Sokka might be hard to identify with: He’s sexist: “Leave it to a girl to screw things up.” He’s unadventurous: “I’m just saying that if I had weird powers, I’d keep it to myself.” He’s unsure if they should get involved with Aang.

Are you going to do The Expanse? I think that would be interesting because it took a while for the tv series to catch on, which makes me wonder if there is a structural problem in there somewhere. (Good thing Jeff Bezos liked it!) It could also be interesting to compare the tv series with the book series. Also, I love your annotation project.

Glad to hear it! I've never seen nor read The Expanse, though I hear the books and the show are both great.