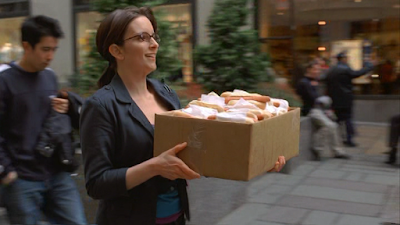 Okay, guys, I know you’re thinking, “It’s nice that Matt’s posting every day, but damn there’s been a lot of these. When will it end?” The answer is “No time soon.” The book is due in 28 days. I’ve got a first draft done (which I won’t submit), but it just doesn’t have enough examples in it. I’m mentioning the same things over and over. I had thought about asking you guys to crowd-source some specific examples I need, but I figured that no, first I just need more examples, then I can crowd-source, possibly after the second draft has been sent in on March 1st. So you’ll get another month of BCIs, probably.
Liz Lemon is in line at a hot dog stand outside the titular building when a businessman breaks in line. She buys every hotdog so he can’t have one, then hands them out on the street. Most people who get one throw it away angrily. She then goes to work, meets with her writers, then gets called up along with her co-worker to Pete to meet their new boss Jack.

Why Liz might be hard to identify with: The first skit that we see that she wrote is making fun of a woman (played by Jenna in a fat suit) for being “overly confident and morbidly obese”! Then she’s told she’s in trouble because she said in a skit that Michael Jackson has a vagina. Her comedy hasn’t aged well!

Keep 'em coming, they are great!