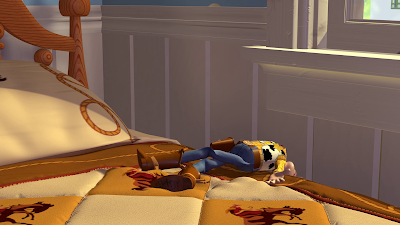 Co-written by Joss Whedon and John Lasseter, America’s two most beloved men!
Young boy Andy plays with his toys, having cowboy Woody arrest Mr. Potato Head. Then he leaves his toys alone in his room and they come to life. The toys realize Andy is having a birthday party and worry they’ll be replaced. Sure enough, Andy gets a Buzz Lightyear and puts it in Woody’s place on his bed.

Why Woody might be hard to identify with: Not much reason yet. He’ll be a jerk to Buzz later.