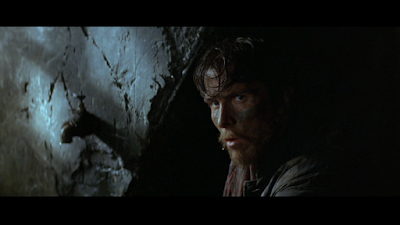 Bruce Wayne dreams/remembers being a boy, falling into an abandoned well on his estate, and landing into a cave where he’s attacked by bats. He wakes up in an Asian prison camp where everybody wants to kill him. A man named Ducard comes to him and tells him that Ra’s Al Ghul can help him find what he’s looking for. After he goes to Ra’s Al Ghul, he flashes back to his parents being killed, then begins his ninja training.
Why Bruce might be hard to identify with: We can guess from the intro that he’s really rich. We then see that he’s chosen a life of beating up people of a different race than himself, which is, y’know, problematic.

Part of the appeal of this beginning too is how it differs from the usual tellings of the Batman origin without contradicting anything vital. Batman is in no small part a fantasy about self-control, self-perfection. Bruce Wayne's trauma causes him to forge himself into a perfect weapon, we all know that going in. To see him only halfway there, flailing and lost, not only makes sense, it makes us care more. It humanizes the almost inhuman Batman without lessening him in any way. We don't just admire him, we empathize with him.

Admittedly, Batman Begins doesn't hold a candle to its brilliant predecessor, 1966's classic Batman, starring Adam West, but what does?

Some days you just can't get rid of a bomb!

I have your book. It is wonderful. When I try to subscribe to your blog on Atom, however, all I get when I click the Subscribe link is a page of code. Help! Thanks!!!!
All good things,
Carol