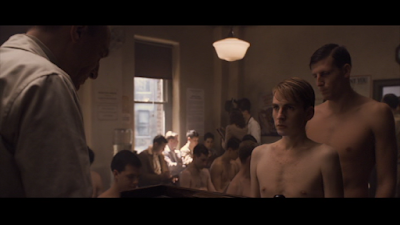 Young Steve Rogers tries to sign up for the army but gets rejected because he’s too puny. His friend Bucky takes on a double date to a World’s Fair, where he tries to enlist again. A German-American scientist is impressed by his determination and reclassifies him 1A.
Why Steve might be hard to identify with: He’s a bit of a sad sack…

Believe
Care
Invest
Strength/flaw: Determined / deluded (but it turns out he’s not really deluded about his chances, so he doesn’t really have a character flaw)
Posted by Matt Bird at 12:18 PM

Could you say his strength is "believes in a cause bigger than himself" and his flipside flaw is "doesn't believe in himself"? I may not be phrasing it right. But basically a lot of the middle of the movie is about how even once he's a super-soldier, he gets told the best way he can serve "the cause" is as propaganda, doing USO shows and selling war bonds and such and staying out of combat. And he goes along with it because he believes his superiors. Then he finally gets fed up with all that and becomes an unstoppable fighting machine on the front lines. Although he is still a bit of a true believer and doesn't think of himself as anything special. Only at the very end when he has to ditch the plane carrying the doomsday weapon does he believe in himself as the only one who can save the day.

I'd need to rewatch the whole movie to get a sense of his greater flaw. I haven't seen it in a while. I just rewatch the first fifteen minutes to write these, and I was surprised that he really didn't have much of a flaw yet (compared to Iron Man and Thor, who have huge flaws.)