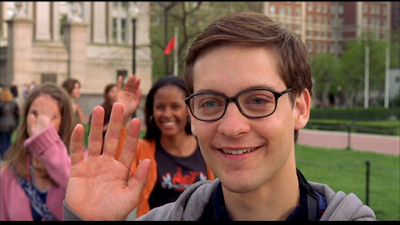 Dorky teen Peter Parker runs after his school bus after missing it. His crush Mary Jane gets the bus to stop, but sits with her jerky boyfriend Flash. Peter arrives at a college for a field trip, where his friend Harry Osborn is dropped off by his rich father Norman, who is impressed by Peter. They tour the university lab and Peter gets bit by a spider, then goes home to his aunt and uncle and heads quickly to bed. He wakes up super-strong.
Why Peter might be hard to identify with: He’s a bit of a mopey sad sack. The main thing he wants is to hook up with the hot girl, which is easy enough to identify with, but also disappointedly unambitious.

Believe
Care:
Invest
Strength / flaw: He doesn’t have much of a character strength. I guess gentle / mopey
Posted by Matt Bird at 11:10 AM

Peter's opening voiceover does some key work too. As you point out, "He’s a bit of a mopey sad sack. The main thing he wants is to hook up with the hot girl, which is easy enough to identify with, but also disappointedly unambitious." Sure, but his perception of his problems does some of the Believe/Care/Invest work. The first words we hear are Peter's, as he tells us (pulled from IMDB):

Peter Parker: [voiceover] Who am I? You sure you want to know? The story of my life is not for the faint of heart. If somebody said it was a happy little tale... if somebody told you I was just your average ordinary guy, not a care in the world... somebody lied. But let me assure you: This, like any story worth telling, is all about a girl. That girl. The girl next door. Mary Jane Watson. The woman I've loved since before I even liked girls.

[referring to Flash Thompson sitting next to her]

Peter Parker: I'd like to say that's me sitting next to her.

Peter Parker: Aw, heck, I'd even take him.

[he and the other kids see a nerdy Peter running along the bus, asking to stop]

It starts mopey and annoying, loaded with teenage angst, up to the "somebody lied." But then he changes the tone. First, he gets romantic without self-pity - when he talks about Mary Jane, there's nothing negative. Then he tacks back to moping, but with a little wit. He isn't happy with his life but he doesn't slide into self-pity, and the bus-driving-away moment shows us that he is justified with his unhappiness. He's not Eeyore, looking for reasons to be sad, he's Everybody, noticing that things aren't working out for him and he wished they did.

A comment! I was beginning to fear that these 31 days would be barren

All good points. And of course the bus driving away from him means that he can start the movie running, and it's always good to start with some physical activity to prove you're not too mopey.