Rulebook Casefile: Playing with Expectations in the “Black-ish” Pilot 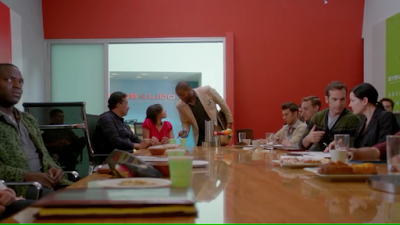 Kenya Barris knows we’ve seen pilots before, and he knows we’re trying to get ahead of him. So he plays with us.

We meet a wealthy, overconfident man with a closet full of individually lit sneakers, and he assures us in voiceover that he’s absolutely sure he’s going to get a big promotion today. He promises his family and co-workers it’s coming. Then his boss gathers everybody in the conference room and announces that sure enough, someone is going to be promoted to Senior Vice-President. Our hero confidently picks up his stuff and begins moving over to the “senior management only” side of the table before the boss announces the name. On the way, he cockily says to a woman of color: “Sabrina, I’m not going to forget about you when I become one of them, alright?”

It’s only after Dre has shoved others aside to take his new place that the boss finally announces, “So without any further ado, I’d like us all to give a warm congrats to…”

But there’s one hitch: Specifically, his boss announces that he’ll be “the SVP of our new Urban division.” And Dre has already told us in voiceover that he considers “urban” to be a ridiculous term. Dre is clearly not pleased, and says in his voice-over, “Wait, did they just put me in charge of black stuff?”, then we cut to commercial.

So why did Barris push all of our “they’re about to announce someone else got the promotion” buttons, only to have our hero’s overconfidence be validated after all? Well, it sends us on an emotional rollercoaster: We’re excited for him, then worried about his overconfidence, then almost pitying his delusion that he’s going to get it, then shocked to be happy for him …then shocked again when we realize that, in Dre’s mind, this is a slap-down. As far as he’s concerned, he didn’t really get a promotion. He’s only been put in charge of his own ghetto. Sure enough, when he gets home, his father calls him, “head puppet of the white man.”

Burris has toyed with our pre-existing narrative expectations in order to convey to us the hero’s peculiar emotional state. This moment establishes the tone of the whole series: Dre is a winner but his psychological and cultural baggage makes him feel perpetually dissatisfied. As in any good ironic story, he’s either winning by losing or losing by winning.
It’s always good to hurt your hero in ways that would only hurt your hero, because then you have a unique and volatile main character. Only Dre would be heartbroken by this news, and that makes him compelling.
Posted by Matt Bird at 1:00 PM

While reading I thought that this was a good example of making bad news & inconveniences specific to the hero, and then I read the last paragraph and you said it! Everyone dislikes not getting a promotion, and even if it'd be a bit predictable, it very well would have made us pity the hero. But a promotion to the "urban" division was setup earlier to be specific to Dre and gives him internal conflict! (basically just restating parts of what you already said)

[Also surprising that you were able to focus enough to get this out today...nothing to do but wait, I suppose.]

I set up all my Black-ish posts before election day. Whenever a post has a round number time stamp, that means it was pre-posted. I'm a wreck now.

I don't think Matt has anything to worry about, Jo Jorgenson will pull this out somehow

My brother suggested I may like this web site. He was totally right. This publish truly made my day. You cann't consider simply how so much time I had spent for this information! Thanks!football studio live casino