Storyteller’s Rulebook: How to Write Dramedy 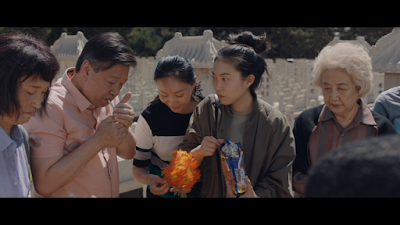 Dramedy is a tricky genre. We’ve looked at Sideways, which has some broadly comedic scenes, some entirely dramatic scenes, and lots of wry scenes in between, but The Farewell represents a different sort of quiet dramedy that constrains itself into a narrower range, never really allowing us to laugh out loud, but gently teasing out the inherent ironic humor of its situations throughout.
Let’s look at a great quietly-comedic scene, when the family visits the grave of Billi’s grandfather. As with many other scenes in the movie, we’re observing a Chinese cultural ritual that is baffling to Billi.
We have just heard the mom complain about how China has professional criers at funerals, then we cut to an ostentatious crier at a funeral, so we’re invited to assume this is a professional another family has hired.

Meanwhile, Billi’s family have brought the grandfather’s favorite foods to put on his above-ground tomb. they fight over whether they have to open the bags of cookies and/or peel the oranges (“Yes, peel them, otherwise he can’t eat them”).

Billi’s dad then tries to lay a lit cigarette on his father’s tomb but his mother objects:
Eventually, they just start eating the food themselves and having a good time. Then the scene gets a bit more serious as grandma asks, “Why’d you have to leave us so early?” The answer, as we learned elsewhere in the movie, is that he had cancer and she didn’t tell her, driving home the gravity of Billi’s decision.
Indie dramedies thrive on this sort of not-quite-laugh-out-loud scenes full of wonderfully ironic comedy, often hand-in-hand with the movie’s drama.  A solemn ritual results in petty bickering. A dead man isn’t allowed to smoke.  Lots of big and little lies are told, all in the name of genuine love and affection. The whole movie is right here.
Posted by Matt Bird at 1:00 PM

I think this idea is key and would benefit from elaboration: "Indie dramedies thrive on this sort of not-quite-laugh-out-loud scenes full of wonderfully ironic comedy, often hand-in-hand with the movie’s drama." That latter part is critical. In a dramedy, comedy and drama not only mingle, it's hard to tell which of them you're going to get next. I' d think that to make that work, the comedy can't wander too far off from the core mood, nor, I would guess, could the drama.

Heavy drama and wild comedy can co-exist - that's how Charles Dickens made his money - but works like his are far from "dramedies." A drama can have comic relief and a comedy can have dramatic scenes. In a dramedy, I think the humor and the drama derive from the same source and mingle thoroughly, with the latent comic potential of the drama poking out and the latent drama in the comedy returning the favor.

It feels like dramedy depends upon maintaining a small distance from its drama. Without that separation you'll lack the awareness of its absurdities and ironies. But it can't be so far removed that the drama loses its power.

So basically what Matt said, but longer.