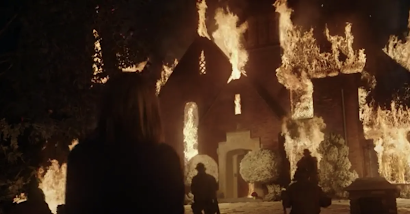 I haven’t mentioned it in years, but one of the two screenplays I got that won some money and got me signed by a big-deal manager was my biopic of Alan Turing. It had a lot of big fans in Hollywood but they said they couldn’t make it because Turing was gay, so my manager gave up on it. A few years later, social mores had changed, and another Turing script went out, which sold for a million dollars and won an Oscar. Oh, well.

When I was structuring the script, I decided to play a trick. My script covered many years and ended with my hero’s suicide, which is kind of a bummer. I decided to begin with the discovery of his body and have a government investigator suspect foul play and reconstruct the story of Turing’s life. In the end: Nope, it was just a suicide. But the false mystery provided more structure than the script would have had otherwise.

“Little Fires Everywhere” does a similar thing. The Richardson house has burned down and everybody naturally suspects daughter Izzy, who has disappeared.
We already sense that Moody is, in some ways, smarter than his brother and sister, and he has his doubts about Izzy. Then Ng points out that nobody has connected the fire yet to the disappearance of two more people: Mia and Pearl. The implication is clear: Izzy probably didn’t do it, and the reader is invited to spend the book trying to guess the real culprit.


And in the end, we find out the culprit is… Izzy, working alone, who went around the house starting little fires everywhere, just as Lexie and Trip assumed. It was a false mystery, tricking us into reading avidly.

But ultimately it’s fair, for the same reason my own false mystery was fair, because Turing ultimately was sort of murdered by a larger conspiracy, and lots more people were ultimately responsible for the complex chain of events that led Izzy to start the fires. It turns out to be worthwhile, in both stories, to closely examine the events leading up to this tragedy to discover the complex web of ill-will that led up to it.

Both stories are fairly diffuse, and brought into sharper relief by beginning with a flash-forward and a false mystery. It’s a devious trick, but I recommend it with some stories.
Posted by Matt Bird at 2:27 PM

The eels changed their minds? (It's spelled "mores.")

I think it would be great if you posted your Alan Turing script and we did an episode about it. I'm guessing there's no chance of it being made now, because of THE IMITATION GAMW. But we know that it's good, because it won you money and representation. And yet you wrote it before you thought up all these rules, so it would interested to see how you may have unconsciously fulfilled (or creatively broke) those rules. Let's see some great Matt Bird content!!

Where is the like button on these James Kennedy comments

I visit your blog. It is really useful and easy to understand. Hope everyone gets benefit. Thanks for sharing your Knowledge and experience with us.
wordpress
ufa88kh.blogspot
youtube
live roulette

I was recommended this blog by my cousin. I am no longer positive whether or not this publish
is written via him as no one else understand such exact approximately my trouble. You are amazing! Thank you!
english stories