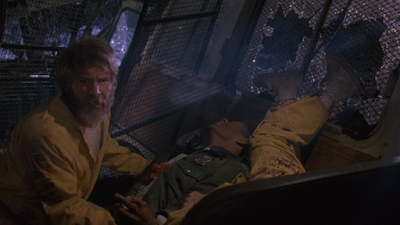 Yes, I’m trying out Connect Care Commit instead of Believe Care Invest, just to see how it feels! I can’t decide.

Why Richard might be hard to identify with:
Connect
Care
Commit
Five Es
Rise above
High five a black guy
Compassion

This movie has TWO protagonists, though! What about Gerard? How do we connect, care, and commit for him?

For this movie, we need to consider connect/care/connect for Gerard just as much as for Kimble. They're complementary. It's a "two-hander," as they say. Indeed, perhaps the only way Ford is able to get away with being such a gruff, sulky, mumbly Kimble is because Tommy Lee Jones' Gerard is so colorful, funny, and bombastic.

These two protagonists complete each other, and indeed, they "emulate" each other: Kimble must become a Gerard-like detective to solve his wife's murder, and in the final scene, Gerard plays doctor when he takes care of KImble's hand with the ice pack.

That final scene makes me feel that "The Fugitive" is the only true love story of the 1990s.

Re-watch that final scene! Look at the way Harrison Ford gazes at Tommy Lee Jones, as a tender and grateful bottom. And Tommy Lee Jones, the giddy and appreciative top. They might as well be making out in that back seat!

But what about the end of Titanic? "I love you, now let me share that door with you." "But then I wouldn't be able to stretch out..."

Now that I think about it, I guess Kimble is emulating Copeland, his fellow fugitive, isn't he?

I would agree that Kimble is emulating Copeland.

This film is so good and it IS all about that relationship between Kimble and Gerard. I wish there were more well done "friend" love stories, to be honest.

Does this remind anyone of The Shawshank Redemption? A film in which the apparent protagonist has little to no character arc while the best friend/ally of the film experiences the real change? Gerard flips on his "I don't care" moment, and Red chooses to get busy living. Red doesn't necessarily act as an antagonistic force in the way that Gerard does, but he never believes Andy didn't kill his wife until Tommy shows up to prove it much later in the film. And Andy/Kimble both fight to overcome their respective miscarriages of justice.

Both much better love stories than Titanic.